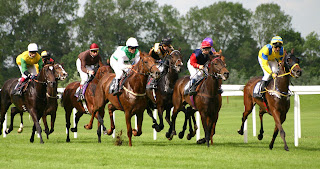 ROYAL Sabah Turf Club (RSTC) is set to achieve another new milestone in the state’s pony racing this coming Sunday, as it will be holding its maiden thoroughbred horse race almost a year after shifting operation to Tambalang Race Course in Tuaran.

The race will feature 12 thoroughbreds running over 1,200m at the international-standard race track in Tambalang with two horses in paddock standing by as reserves. The stake prize for the race is RM8,000.

“To be able to do this in less than a year is an achievement for RSTC and it reflects the present Management Committee’s commitment to further improve the standard of the sports of horse racing in Sabah,” he said.

According to him, the horses that had been handicapped are from Tuaran, Melinsung, Keningau and Sandakan which have never been raced against each other except those three over height ponies. Some of them were imported from Perak Turf Club, Sungai Besi selangor and Singapore.

“Most of the owners are very eager to try out their horses as the present racetrack are very suitable for thoroughbreds and its' hard to pick the winner. Be prepared for big payout as this race is a four forecast bet,” he added.

Adelaide, Kinda Delago and Anfield Princess had been slated for the thoroughbred race because they could no longer take part in pony racing since their height had reached more than 60 inches tall.

Lim went on to note that the said race will give the punters a preview of the Thoroughbred Cup that will be held this coming Christmas, in addition to the Christmas Cup for Class II ponies.

RSTC is also treating this as a platform for it to join the Malaysia Racing Circuit one day, where the standard of horse racing is considered as international class.

In this respect, Lim revealed that he had recently led a delegation of 40 people comprising of life and full members as well as horse owners and jockeys to Ipoh, Perak to attend in the National Stock Farm Auction on Nov 19.

Among those in the delegation were other committee members namely, Terrence Lee, Haji Maljan Haji Sogon and Awang Shamsi as well RSTC General Manager, Anuar Latiff.

He said the RSTC, which was invited by the Perak Turf Club for RSTC to attend its annual Coronation Cup, had selected the full and life members to come but in the end the numbers added to 40 as others like horse owners and jockeys also wanted to take part at their own expense.

“This shows that they are very interested to gain knowledge on how an established club like Perak Turf Club operates and conducts the horse race meets,” he said.

“It is not impossible that someday Sabah will produce champion thoroughbreds and race in the MRC provided we continue to be committed in our effort to improve the sport’s standard and quality in Tambalang,” he said.