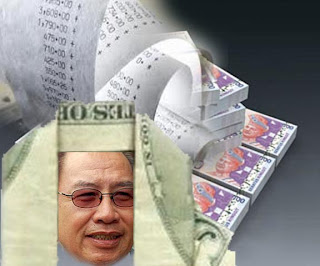 If deficit with water bills is added excluding the bond factor, Sabah will suffer a deficit in revenue of over 40% next year, according to CigMA. The state government itself expects revenue to be RM2.75 billion next year with the deficit at 11.67% (RM 320 million) while the latest Auditor-General’s report gives Sabah a good rating for financial management.

It’s not known whether the state budget takes into account the water bills and the deficit with water bills cited by the NGO.

“It’s surprising that the civil service did not engage professionals for the job,” CigMA chair Jeffrey Kitingan told a press conference here yesterday. “Anyone can see through the budget and pick holes in it.”

Jeffrey, for the first time in many years, had attended the state assembly sitting on the budget last Friday.

He wanted to share his NGO’s main concerns on the state’s “frightening” budget with stakeholders. Jeffrey is also the outgoing vice-president of PKR and is currently on two months leave until Dec 16.

Elaborating on his charge of “creative accounting”, Jeffrey stressed that the Sabah budget is a bundle of contradictions when it comes to the salient figures or related matters and issues.

For starters, he wants the state government to explain how the per capita income in the state will reach RM27,950 next year from this year’s supposedly RM26,355 “when the World Bank says that 40% of Malaysia’s poor reside in Sabah”.

If the figures are accurate, the public has the right to an explanation on the distribution of this wealth, he points out. “When there is no explanation, the rakyat (the people) will speculate.”

Interestingly, CigMA has discovered that the state government oversaw not one but two bond issues in mid-2009, that is, RM500 million by the Sabah Development Bank (SDB) and another for RM544 million by the state ministry of finance.

“It’s the SDB bond issue that the media talks about all the time, with the state government responding that it has nothing to do with it and that it’s purely undertaken by a company,” said Jeffrey. “Now, we discover from the state budget that there was actually another bond issue around the same time totalling RM544 million. So, we are talking about two bond issues last year and not one.”

He does not think that the second bond issue had the approval of the state assembly as required by the state constitution. An unnamed CigMA accountant, who was also present, said that if the question of guarantee arises, the federal government is not involved either in the bond issue.

CigMA wonders why the RM544 million, being a loan and therefore a liability, has been shown in the 2010 state budget as revenue–not expenditure–and in the process apparently showing a false ‘reduction in the state deficit expenditure’.

Jeffrey suspects that the state assemblypersons ‘are ignorant and not even aware of this deception’. The whole state assembly, he said, should be held equally responsible for supporting this ‘deception’ because it approved the state budget without much debate.

“Why does the state government need RM544 million for no apparent purpose when the state ministry of finance claims that Sabah has reserves of RM2 billion?” asked Jeffrey. “The only plausible answer is that the RM2 billion is fixed asset–not liquid or cash–and therefore the bond was used as cash reserve for paying emoluments (wages) which needs eight months reserves.”

Issuing a bond for ‘no apparent purpose’ does not come cheap either at the same time. The amortisation of the bond, maturing in 2014 at a coupon rate of 5%, requires the state government to pay RM615 million with the coupon amount at RM71.96 million and monthly payments of RM10.27 million coming to RM123.24 million for a year.

This, according to Jeffrey, is obviously the wrong way of solving the payment of the emolument problem. The reason: the state ministry of finance ‘purposely’ exposes Sabah to unnecessary default risk while at the same time there are no changes to the capacity and capability of the state institutions.

Emoluments alone come to RM597.56 million per annum for an estimated 21.7% of the state labour force.

Asked about the AAA rating given for the bond issue by Moody and Rating Agency Malaysia (RAM), Jeffrey explained the rating was not linked to capability or capacity but available resources. This simply means that Sabah has good asset-based collateral. In simple terms, the whole state has been pawned and in the case of default, the whole state can be auctioned off, Jeffrey claimed.

He cautioned against not comparing apples with oranges and cited the case of the US, in particular.

“We can’t compare with the US which has a huge economy and investor confidence remains high,” said Jeffrey. “Even then, bond issues in the US have reached a critical point vis-à-vis China, a main trading partner. So, US President Barack Obama had to turn to India and Indonesia recently to soak up Treasury bills (or bonds).”

Arguing against following in the footsteps of Washington on bond issues, Jeffrey opines that unlike in Sabah, the world has confidence in the US economy and in the greenback which is still used as a global trade currency.

On the revenue front, the CigMA chief lamented that most income in the Gross Domestic Product (GDP), namely income tax, export tax and tax on petroleum and so on, all goes into the federal coffers. This meant that the federal government has collected RM15 billion in income tax alone last year in Sabah, CigMA has discovered, and RM22 billion if other collections are included.

In return, Sabah got RM20 billion from the federal government for the entire Ninth Malaysia Plan (2006-2010) period.

The Production Sharing Contract (PSC), meanwhile, allocates only 5% in oil royalty for Sabah–with Petronas figures being a state secret–compared with 705 in neighbouring Indonesia. To add insult to injury, the state is no longer allowed to collect import and excise duties on petroleum products and instead pawned off with a token RM120 million a year.

The state government, at the same time, “has made no attempt to explore new economic growth areas or to seek new income streams”. The total state government investment and redeemable loans in 2009 amounted to RM4.9 billion, according to the state budget, but the income for next year from this huge amount will total only RM158.09 million or a paltry 3.23% return despite the risks involved.

All this confirms that the state is ‘stagnating on purpose’, said Jeffrey, and with the people made to believe in rhetoric and hanging on to palliatives.

He cautioned against looking at the consumption and demand patterns in the US and Europe which have a well-established manufacturing sector unlike Sabah which is 60% dependent on oil palm.

“There is no concerted effort to do away with the National Cabotage Policy – 'let’s look at Brunei to circumvent the NCP' – or develop Sabah to be at par with the states in Peninsular Malaysia,” he said, implying that the state was virtually a colony of Peninsular Malaysia.

“All the talk of fixed deposit and having a good relationship with the federal government means nothing when Sabah leaders in the state government just keep quiet on the woes facing the state.”