WHAT HAPPEN TO RM544 MILLION BOND? 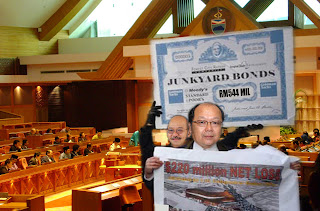 The bond is a debt which has to be repaid in 5 years’ time. In other words every Sabah citizen now has a debt of RM200 because of the bond.

We have been asking the Chief Minister who is also the minister of Finance to reveal the purpose of the bond. The answer given by Datuk Johnny Mositun, Information Chief of PBS was that the RM544 fund had been channeled to projects investment. Was it used as a loan to finance a condominium project in Jalan Ampang of Kuala Lumpur?

If it had been used as investment, we want to know how much was invested into what kind of investment and what is the return so far. If it was the Ampang project, is the project successful? There must be a progress report.

The budget listed out the amount of allocation to each Ministry. However, it is puzzling the allocation for the various categories are comparatively higher than the amount the relevant Ministries will receive.

It has reflected the reduced role of the Minister has been reduced. Similarly the Ministry of Industrial Development allocated with only RM31.41 million. The special allocation for industrial development is RM 98.83 million.