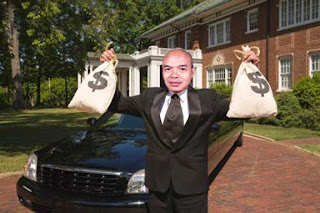 THE Sabah Budget 2011 which was tabled in the State Assembly on 19th November 2010 is one with little substance but with only one thing in mind, the 13th general election. The power of money is still relevant in Sabah as proven by the recent by-election in Batu Sapi.

Without any reservation, the Chief Minister has gleefully allocated RM1 million to every state constituencies. True to the BN spirit, only UMNO and BN representatives will be the direct recipients making them IMM13 or an “Instant Malaysian Millionaire for the 13th General Election”.

DAP National advisor and MP for Ipoh Barat Lim Kit Siang has said that the special annual allocation of RM1 million for each constituency will not benefit the people but to be used by BN representatives to buy votes. This is a political corruption of the highest order and he urged the anti-corruption agency MACC to take note and investigate.

Sabah DAP is surprised by PBS Vice President Herbert Lagadan’s remark saying Kit Siang is mischievous as reported in the local newspapers. We are not surprise at all that the remarks come from Herbert Lagadan who is also the Assemblyman for Kadamaian.

Lagadan further said that the DAP veteran leader is saying nonsense and was just making up pure assumption. He added that Kit Siang is totally ignorant, fearful and jealous of BN capabilities.

Sabah DAP will leave it to the people to judge if the Kadamaian representative has been truthful and sincere in making those remarks. We know for sure that Kadamaian is one of the least developed areas in Sabah. We have seen how bad the basic infrastructure is especially the road, water and electricity supply.

Recently the JKKK for Kg Gondokut in the Kadamaian constituency has resigned en bloc and many have since joined Pakatan Rakyat through DAP. In fact, Lim Kit Siang’s visit on the 19th November was to witness the formation of Sabah DAP branches for Kota Belud, Usukan and Kadamaian.

Better leaders from Kadamaian are coming out openly to offer themselves to serve the people there. Herbert Lagadan must realize that he has been given ample time and opportunity to develop Kadamaian but he failed miserably. Sabah DAP hopes that Herbert who will soon become an instant millionaire will utilize the money to upgrade and improve the basic infrastructure in Kadamaian. This is if he wants to leave behind a positive legacy.