STAND UP AS A TRUE MALAYSIAN! 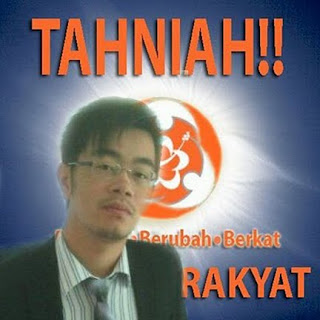 DAP KK Youth Chief, Junz Wong today urged all Sabahans regardless of race, religion and culture to unite with our fellow Malaysians in West Malaysia and Sarawak. The slogan ‘Sabah for Sabahans’ is indeed a brilliant one.

But State-based parties such as PBS and SAPP have found out that this slogan is not bringing in the votes anymore. We have to remember that the UMNO and BN government in Sabah is holding on to power through the legalization of illegal immigrants and putting them in the electoral roll.

This is an open secret and the BN government has never denied it. The unity of all genuine Sabahans is the answer to defeat the UMNO and BN government.

“We have to look at the bigger picture and should not be emotional,” Junz added.

The best way to save Sabah and save Malaysia is for the people of Sabah to be united and vote Pakatan Rakyat.

“We must realise that the UMNO and BN system of government is divide and rule against the system advocated by Pakatan Rakyat which is to unite and serve. Because of the current trend led the UMNO and BN rule effectively,” said Junz.

Junz chided that Sabahans can now help Pakatan Rakyat nationwide to change the government at the Federal level by vote Pakatan Raykat in the next 13th General Election. And it is only through this that we can expect positive changes coming to the land below the wind and throughout Malaysia.