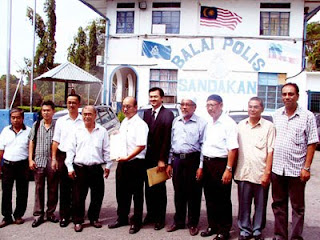 Yong, who is a former Chief Minister, made the report following press statements made by Tham on Nov 3 and Nov 15 that certain Forest Management Unit (FMU) applicants had claimed they were cheated of large sums of money.

Tham claimed that he had been reliably told on many occasions that there were people who received large sums of money after promising FMU deals to some people in Sandakan.

"I was shocked when told by some businessmen that despite payments in promise of FMU approval, they got nothing in the end. These people are my friends and I was forced to clarify that I had nothing to do with FMUs," he was quoted as saying by a local daily.

Yong said based on the statement made by Tham, he suspected the latter was in possession of material information on corruption and other criminal offences which he had been concealing from the ACA, now MACC and the police.

He said he suspected large sums of money were paid by his friends in Sandakan to persons known to Tham in return for FMUs.

"I lodge this report so that a full and thorough investigation will be conducted. I lodged the report here and not in Kota Kinabalu due to the fact that the offences seemed to be committed here," Yong said.

He said during the time that he was the Chief Minister (from May 28, 1996 to May 27, 1998), and there after until the press statements made by Tham, the latter had never mentioned such alleged payments of money to any persons for FMUs.