“I WILL GIVE FULL COOPERATION…” 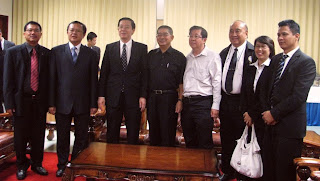 FUNERAL…Tham (2nd from left) join the other guests including Sabah leaders like Datuk Dr Maximus Ongkili (4th from left) and Datuk Johnny Mositun (left) to pose with Chief Minister of Penang, Lim Guan Eng (3rd from left), at the funeral service of the late Dr Lim.

He told the reporters this during a press luncheon held here today, mainly to talk about his cordial relationship and fond memories of his old friend, the late Tun Dr Lim Chong Eu, after returning from attending the latter’s funeral in Penang on Sunday.

“That’s his (Yong) right, he definitely has a right to do so (lodging of police report). When the time comes when the authority concerned requires my assistance, I will cooperate fully and as far as I’m concerned I don’t have anything further to say,” said Tham.

He was asked to comment on the said police report lodged by Yong in Sandakan on 25 November, over Tham’s claim earlier that six timber tycoons from Sandakan had paid money to persons known to him in return for FMU concession but later got nothing.

Tham had on Nov 15 said that he was reliably told that there were people who received large sum of money after promising FMU deals to some people in Sandakan.

Tham further said that he was shocked when told by some Sandakan businessmen that despite the payments, they got nothing in the end, adding that these people are his friends and he was forced to clarify that he had nothing to with the FMUs.

“I feel that we should move ahead and do other things that are more important. There are a lot of works to be done. No point of being concerned or just talk about Sabah being the poorest state when even the late Tun Dr Lim had said Sabah has a great potential and he has given me some tips on what to do and I’m in the process of experimenting some of them and they can be very helpful to Sabah,” Tham contended.

He said there are a lot of things which Sabah could learn from Dr Lim’s leadership and legacy in transforming and steering the state of Penang when he was the Chief Minister.

While many including the former premier Tun Dr Mahathir Mohamed considered Dr Lim as the “father of foreign investment” for Malaysia, Tham tends have a higher regards on Dr Lim that he’s in fact the one who started the world foreign investment trend.

Tham explained that this started way back in 1969 when Penang lost its free trade status and Dr Lim had to come out with some new strategies to transform the island state which he succeeded by encouraging foreign investments to set up electronic factories there. And through transfer of technology and empowerment of the local people, many Penangites eventually went on to head the multinationals corporations in Penang besides developing the Small and Medium Industries (SMIs).

“Today, Penang has the highest number of millionaires in Malaysia who started from scratch,” he pointed out, adding that the same too can be duplicated in Sabah which possesses better potential in terms of vast tracts of fertile land and abundance of natural resources.

“All we need to do is to channel more of our energy to do the necessary things rather than wasting our time politicking which is not worth it. That’s something that will change the future of Sabah. This is definitely something that we could learn from Tun Lim’s leadership and his legacy,” he said.

Tham also revealed that Dr Lim has a special place in his heart for Sabah, so much so that he even thought of settling down in Keningau, Sabah. He had in fact requested Tham to sell a portion of his family land in Keningau to set up his own ranch. They were still talking about it six months ago before he went into coma.

Tham conceded that he regretted that he was unable to fulfill Dr Lim’s dream on this.

Tham also recalled that his relationship with Dr. Lim dated back to 1985 when the latter paid a courtesy call on the newly-formed PBS State Government.

“He (Dr Lim) was then the Chief Minister of Penang and he was accompanied by Tan Sri Dr. Koh Tsu Koon who was his Political Secretary at that time. Both myself and Tan Sri Koh were in the Barisan Nasional Youth Committee,” he related.

He also described Dr Lim as visionary statesman and a “complete gentleman” who was well accepted and respected by both his friends and foes.

“I have not seen people criticized him in the absolute term; those who attacked him when he was in power were merely attacking him politically.

“There is no amount of words that can describe the loss of such a great statesman that the country ever had! I wish I had spent more time with him, tapping his vast experiences and views on many things, very often thinking outside the box. I managed to spend sometimes talking to many people who had work and lived with him during the funeral. None has not grieved his departure,” he said.

He also hoped that one day someone will be able to write a biography of Dr. Lim to tell his life story so as to share his vast experiences, knowledge, wisdom and legacy with the rest of the world.

“I sincerely believe this will be very useful to the development of Malaysia covering all aspects of life. It will be an inspiration to young Malaysians to participate comprehensively in nation building. His contributions to the nation should also be taught in the history subject of our school.

“I also wish to take the liberty here to propose for the setting up of a special museum for Tun Dr Lim to keep the people’s memory of such a great statesman like him alive,” he proposed.