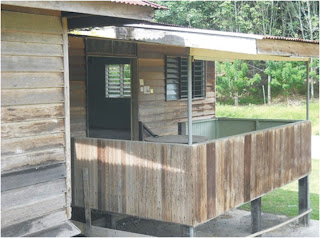 FALSE… the controversial big wooden old house was belong to Laiming Laikim’s late father and was not his own property as claimed by Balassius Masunning.

Laiming claimed that the controversial photograph of a wooden ‘big' house published in the papers actually belonged to the property of his late father, Laikim. Balasius had attempted to mislead the public by giving false information instead of resolving the PPRT problem that had denied him of obtaining PPRT facility to build a decent house. 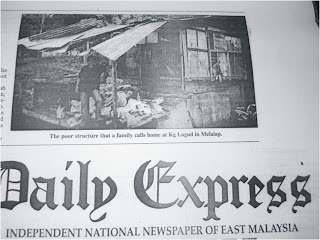 ACTUAL….statement publish in local newspaper show the actual dilapidated house belonged to laiming Laikim which he has stay there before while awaiting approval for PPRT which until today he waited in vain.

He explained that the small, dilapidated hut belonged to him. Since it was broken down, he had to put up temporarily with his schooling children at his father's old house while pending for PPRT assistance.

The kampung folks were disgusted and angry with Balasius for neglecting his duties as the Malalap's People Development Officer. Instead of offering assistance, he was rude and arrogant as to deny and accuse Sabah DAP for providing facts, information and constructive criticism for the benefit of the local ruraL community. He should be thankful instead of being selfish and arrogant to the poor kampung folks who were in need of PPRT assistance.

Sabah DAP Melalap branch chief, Kenneth Kon lambasted Balasius Masunning for being not fair and attempted to insult the intelligent of the rural folks in his own Constituency.

Sabah DAP demands that he should be sacked from his post as he had committed gross negligence for failure in carrying out his duties and for having damaged the good name of the Laikim's family. Laiming demanded for a public Apology from Balasius, failing which he would contemplate of taking legal actions against him for defamation, and damages for the good name of his family.