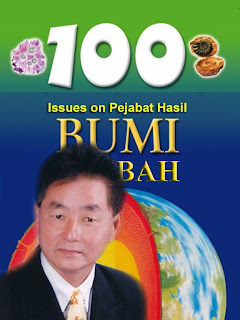 THE Sabah Budget 2011 which was tabled at the state assembly last week is geared towards the 13th general election. The special annual allocation of RM1 million to every BN Assemblymen is without doubt a blatant disregard for the rakyat money which will be utilized to buy votes. On the other hand the government servants who have been working hard has been given a bonus of RM500.00 only and only then those in Group 54 and below are qualified for them.

Sri Tanjung Assemblyman, Jimmy Wong feels that by giving such a small bonus to certain category, the government is not concerned about the contribution of the government officers and staffs to the development of the country.

Jimmy said that the government servants are very important in ensuring government policies and programs are planned and implemented well within the specified time frame.

According to Jimmy, the government is not effective in sourcing for revenue. He explained that sure revenue is not collected because of the poor government delivery system.

He cited the Natural Resource unit or ‘Hasil Bumi’ of the Chief Minister’s Department which has not been proactive in the issuance of land titles. One person comes to mind is Shim Ten Lai whose application was made on 5th September 2002 under ref: JKM.PHB600-1/7/553.

Jimmy cited another example where 15 shop owners in Mile 5, Jalan Apas are still waiting for their lease extension applied 14 years ago. Ironically, the lease has expired on 15th May 2010. In another case, 100 strata titles are jammed up that can easily generate substantial revenue for the State, he added.

Jimmy also touched on the problem of industrial leases been reduced from 999 years to 99 years upon conversion of land use. No reason or explanation has been given by the authority on this matter. It is learned that banks require industrial land to have at least 30 years unexpired lease to qualify for collateral and many such lands are now having less than 15 years lease.

The President of Federation of Sabah Manufacturers (FSM) Datuk Wong Khen Thau has been reported to say that industrial landowners faced decade long wait for approval to extend their leases and at same time incurred a high premium when the extension is approved.

Wong is also unhappy to note that as in the case of the Kolombong industrial area there is no clear, transparent guidelines and formula for approval of land lease extension and the premium rate.

Jimmy urges the government to revamp the delivery system in Hasil Bumi and related departments to expedite the issuance of land titles and to prepare a clear and transparent guideline and formula for the approval of industrial land lease extension and premium rate. With the delay in releasing these land titles, the government is losing millions in revenue.