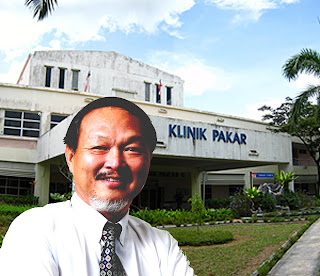 KOTA KINABALU Member of Parliament, Dr. Hiew King Cheu asked in Parliament on the 23rd of November the question on whether there are any programs carried out by the Ministry of Health to increase and improve the number of specialist doctors, medical offices, radiology technicians, new equipments, consumables, and ambulances for the hospitals and clinics in Sabah.

The minister replied that the government knew about the problems and at the moment taking appropriate action to tackle the problem in the lacking of medical personals in most hospitals and clinics. The measures taken are as follows:-

(1) to recruit from foreign countries the medical officers, and specialist doctors on contract basis,

(2) to appoint more medical officers and specialist doctors from the Ministry of Health (KKM) on contract basis,

(3) to take in specialist doctor from the private sectors on part time and session basis,

(4) to encourage Malaysian who are serving overseas to return,

(5) choice to select and work within the facilities of KKM.

Apart from that, there will be an increase in the number of medical training facilities to be set up by both the government and private sector from year to year. For 2010, there are 1020 person undergo medical training compared to 700-800 people last year, and there is an increase during 2006 of 1059, 2008 some 2319 and follow by 3058 in 2009, and hopefully 3634 people in 2010. On completing the course, these people will be sent to the various hospital and clinic following the requirement in the medical service.

On increasing the specialist doctors, the Ministry has increased the slots in all the medical faculties in the institution of higher education’s from 450 to 600 from the session 2008/2009 to provide chance for the student to follow the courses. Also starting in the 10th Malaysia Plan (RMK-10), the slot shall be increased further to 800 slots. We hope by doing so, the number of specialist medical personals can be increased to serve in the medical professions.

To this effect, the government is working with the Malaysia Medical Council, other agencies and departments to uplift the medical services for the need.

For the Radiology department within the hospital, there is a shortage of technicians, operators and even specialist doctors, especially in the X-ray (diagnostic) and X-ray (therapy) department. The intake for the two departments is in progress, and they mostly come from graduates who had completed their training in the KKM training institutions and outsourcing.

KKM has program in tackling the needs on the facilities, equipments, consumables, and ambulances and also in terms of upgrading, replacement, and new administration. This depends on the availability of fund and its urgency.

Dr. Hiew said the KKM has not looked into the major cause on the issue why it is so difficult to attract specialist doctors and other medical officers to work in our hospitals especially in Sabah.

The real reason is still on the issue of pay amount. Our doctors, nurses and medical personals are working under heavy pressures and long hours due to lack of replacements.

If the pay is low and benefits little, we don’t expect our medical profession in the government services be improved, and it is more profitable to work and operate a private clinic or even work overseas where one can earn 10 times the money. If this is not solved, the plans by the KKM will not be able to function.

Therefore, it is an urgent need to review the pay structure of the medical personals in Sabah, so as to attract more people to work in the hospital and clinic in Sabah. The intake to the KKM training programs and other medical institutions should give more chance and slot to eligible Sabahan, and allow these graduates to come back to serve the people in Sabah.

If these programs had been implemented many years back as mentioned by the Minister, Sabah won’t have the serious problem that we are facing today. Many patients had die due to bad medical facilities and lack of doctors, are they deserved to be dead?