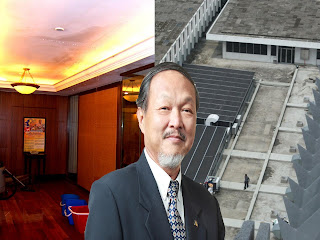 THE Parliament building is leaking seriously again this afternoon after a down pour of rain in Kuala Lumpur. This time the rain water is pouring down through the roof and ceiling of the Members of Parliament coffee lounge. The leaking is very serious and a few buckets have to be put to collect the pouring water.

The Parliament building is famous for the leaking roof and after spending huge sum of money during the past few years, the problem still remains unsolved and looks like the leaking problem is getting worst. Dr. Hiew King Cheu the Member of Parliament for Kota Kinabalu commented this when he was at the coffee lounge during the down pour of the leaking water through the ceiling.

May be it is because the contractor appointed is incompetent or did not do his job right. Some one must be held responsible, otherwise tax-payers’ money are wasted for nothing.

Dr. Hiew suggested a report to be made and submit to the Parliament for further action to be taken to avoid future mishap. He also warns that if the water leak through to electrical wiring or light fittings this may cause a black out in the Parliament building or major electrical fault. Therefore, immediate action is necessary. We don’t want the parliament meeting session being interrupted.