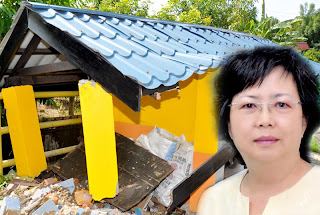 “This Sunny Garden Bin Centre looks so new and it is shocking how it can collapse just like that”, say Luyang Assemblywoman Melanie Chia when alerted of the collapse and upon inspection today.

It is understood that there are altogether 25 bin centre that have been constructed in Kota Kinabalu city area. It is also understood that no tender was called for this construction and the work was awarded directly to the contractor concerned.

“Is there any element of corrupt practice here? We ought to know because we are using Kota Kinabalu rate payer money and tax payer money and these monies should be used efficiently and effectively”, say Melanie.

“It is very fortunate that no one was hurt in today collapse. What is the guarantee that future collapse will be casualty free? I hope DBKK will take this seriously to ensure that all projects undertaken are carried out with greater accountability of public fund and also make sure that projects implemented comply to standard and safety requirement”, Melanie said.

“DBKK and the engineer concerned should explain to the people how the roof top of the bin centre collapsed. They owe it to the people of the city”.