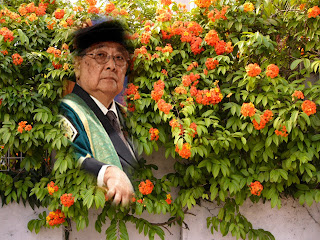 MY relationship and bonding with Tun Dr. Lim Chong Eu dated back to 1985, when he paid a courtesy call on the newly-formed PBS State Government. He was then the Chief Minister of Penang and he was accompanied by Tan Sri Dr. Koh Tsu Koon who was his Political Secretary at that time. Both me and Tan Sri Koh were in the BN Youth Committee. I was often invited to many private functions together with Tun Dr. Lim.

My first encounter with Tun Dr. Lim was tough and challenging, he looked serious but very kind. He was an extremely curious man, asking all kinds of questions. Some to test you, others were genuinely seeking for an answer. No one would doubt that he was an extremely knowledgeable man, hence making his questions difficult to answer.

I still remember well once in front of the Foyer of Shangrila Tanjung Aru Resort, there planted a few Bauhinia Kokiana, a very distinctive and popular garden creeper today. He told me that this plant grows wild in the Sabah Forest, but only flower once or twice a year. The plant at the Hotel, like others planted in the Garden, flowers everyday! He then said to me, I should find out why it is so? Until today, I was not able to get an answer.

We have met over a dozen of times since then. I would pay him a visit every time I were in Penang. The last one was only a few months ago. Each meeting lasted several hours. Topics of our conversations ranged from aquatic plants to zoology - literally A to Z! I have benefitted tremendously from those conversations.

There is no amount of words that can describe the losses of such a great statesman that the country ever had! I wish I had spent more time with him, tapping his vast experiences and views on many things, very often thinking outside the box! I managed to spend sometimes talking to many people who had work and lived with him during the funeral. None has not grieved his departure!

And I also know for a fact that he has a special place for Sabah in his heart. In fact he wanted badly to live in Sabah for good, unfortunately, I was not able to arrange early enough. I now only live to regret this and not able to fulfill this dream of his!

I really hope one day, someone will be able to write a biography of Tun Dr. Lim to tell his life story so as to share his vast experiences, knowledge and wisdom with us, which I sincerely believe if done, will be very useful to the development of Malaysia covering all aspects of life! I believe it will inspire all young Malaysians to participate in and contribute towards Nation Building. His achievements and contributions to the nation should also be taught in the history subject of our school.

I also wish to take the liberty here to propose for the setting up of a special museum for Tun Dr Lim to keep the people’s memory of such a great statesman like him alive.