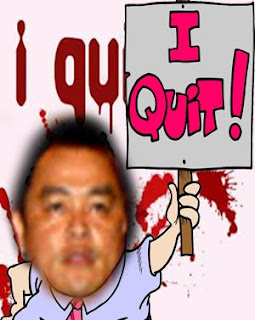 WITH a vision to press forward the interests of Sabah and Sabahans within Malaysia in the near future and with a wider and more liberal take outside party lines, I have tendered my resignation from Parti Keadilan Rakyat (PKR) with immediate effect.

The political landscape in Sabah has been fast-changing in the last two years. From a rich State with abundant resources, Sabah is now the poorest State in Malaysia and the clarion call for true Sabahans to stand up and be counted is growing louder every day. I would like to volunteer myself towards the cause and interests of Sabah and Sabahans.

In the best interests of Sabah and Sabahans and always loving Sabah more in my heart, I find that it is best that I continue my journey with Sabah outside PKR and other Peninsular-based parties.

Between BN and Pakatan Rakyat, it has become increasingly difficult to sell the latter to the people in Sabah. In line with the people’s aspirations, I can no longer subscribe to a Malaya/Peninsular Malaysia-based coalition which insists on contesting all seats in Sabah. To be consistent in recognizing the autonomy and interests of Sabah, the least that Pakatan Rakyat can do in Sabah is to at least match Umno which has left half the seats to local parties to contest. In Sarawak, Umno has left it entirely to Sarawak-based parties.

I believe that we need something better than BN in Sabah given the issue of state rights, autonomy, upliftment of the people and genuine development of the State and its abundant resources. Obviously, we are not going to find this in Pakatan Rakyat.

Perhaps, we will be able to work together again some day with PR given the same objective and we can travel the same road together.

But for now, for Sabah ’s sake, I must go my way just as PKR will continue on the path that it has chosen.