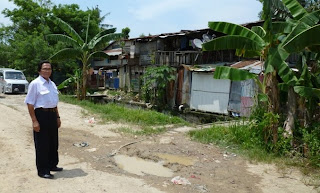 THE SO-CALLED ‘Kg. Nabakong’ which is adjacent to the Taman Somerset Phase 1 and 2 on a piece of private land in Nossob, Penampang is the focal point of many complaints received by the Kota Kinabalu Member of Parliament office.

The people complained about the many illegal squatter houses that are believed to be used by the illegal immigrants. They also said that they feel insecure and not safe to have such a big group of illegal foreigners living at their back yard.

There are no proper sanitary facilities and no garbage collection too. Every thing is being thrown into the open drain next to the land which created foul smell and very unhygienic.

The people here also said there is big lorry making use of their housing roads to park near the illegal housing colony. All these have made them really angry and upset, when especially they complaints to the Penampang District council had not been given any action and response.

The issue was brought up to the notice of the Penampang District office by the DAP early last year, and they were given assurance by the authorities that they will take action, but until now there was nothing being done to solve the problem for the people in the area.

Edward Ewol Mujie was accompanied by Max Teo to attend to the complaints and visited the problem site recently. They found the complaints were genuine and the place is crowded with foreigners and there are many illegal houses built.

Edward said he felt that the council should take action immediately to clear the land to protect the interest of the people who are staying in the nearby housings. Their rights and security have to be protected before some serious cases happen. The environment is totally spoiled by the illegal squatter housing here.

If it is against the laws for the land owner to rent out his land to construct the illegal houses and especially so to the illegal immigrants, why the council and other authorities did not take action or don’t even border about public complaints? What is the use of having laws now? Is it the council trying to protect the land owner or the people squatting there?

The Sabah Minister of Local Government and Housing Datuk Hajiji must be deaf and blind not to notice about this case, or he purposely pretend that he didn’t know at all. If no action is taken, he is equally liable and responsible because he is the minister in charge of all the housings in Sabah. In fact, there are plenty other illegal housings which are needed immediate action. We will wait to see whether the minister and the local council going to take action or not.