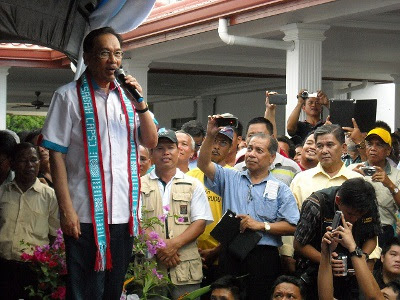 TURNOUT ....The massive turnout at Anwar's ceramah in Sabah bodes well for the opposition coalition in Sabah irrespective of the 'Umno-incited' skirmishes.

KOTA KINABALU : Opposition Leader Anwar Ibrahim has tweaked the lyrics of an old Malay song – Tanya Sama Pokok – to stab at Prime Minister Najib Tun Razak. These days Anwar sings his song – Sabah Hilang – everywhere he goes and this is how the lyrics go:

Last night the exuberant PKR de facto leader sang this song again to a packed-hall of the Star City Convention Centre here where he delivered stinging attacks on the policies of the ruling Umno and its failure to protect Sabahans from foreign intrusion.

Close to 3,000 community leaders turned up to listen to Anwar’s speech, dwarfing the average crowds that other opposition leaders in Sabah could normally attract.

Anwar has also been described as 'Raja Goyang' in several pro-Umno blogs before this.

Anwar reiterated his denial of any link to the Lahad Datu intrusion by Sulu terrorists on March 12, lambasting instead Umno for trying to make him the scapegoat of anything stemming from Umno’s weaknesses.

Anwar also accused the ruling BN of applying dual sets of laws on the citizens, one for the rich – ministers and chief ministers included – and another for the ordinary citizens.

He also alluded to a possibility that Umno might try to sue him over the song “Sabah Hilang”. “This would be the first anyone can ever be sued for singing a song…” he said.

The charismatic opposition leader also defended an old picture of him with former leader of Moro National Liberation Front (MNLF), Nur Misuari, which was being used by his enemies to link him to the Lahad Datu Sulu intrusion last month.

“The picture was taken back when Dr Mahathir Mohamad was the Prime Minister when Nur Misuari was invited for an official visit to Kuala Lumpur,” he explained.

Anwar later launched PKR roadshow bus here before moving on to deliver another electrifying speech at Kampung Lok Batik in Tuaran, some 100km from here, where more than 3,000 people waited to hear him.

He said a small disturbance caused by Umno thugs at the launching of PKR roadshow bus earlier in Kota Kinabalu would not deter the party to reach more people.