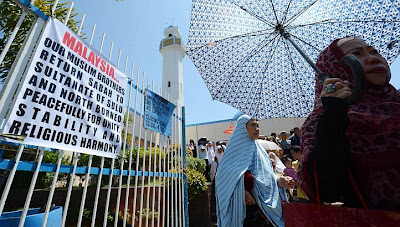 IF THE Government in Putrajaya is truly honest with itself, it will confront the fact that there’s very little sympathy in Sabah and Sarawak on the ground for the security forces apparently battling it out in Lahad Datu. It’s 50 years too late. They might as well pack up and go home and instead recall the Sabah Border Scouts and Sarawak Rangers.

At the same time, the continuing statements from one Jamalul Kiram III, the Manila press, the Philippines Government and Nur Misuari of the Moro National Liberation Front (MNLF) on Sabah and Sarawak are being viewed in the right perspective.

Local political parties in Sabah and Sarawak are convinced, like the descendants of the heirs of the defunct Sulu Sultanate and Nur Misuari that the International Court of Justice (ICJ) in The Hague is the best venue to settle rival claims to the two Borneo nations.

Already, the State Reform Party (Star) led by Jeffrey Kitingan, has reportedly included the ICJ option in their draft Manifesto for the forthcoming 13th General Election.

The ICJ is also the best venue to address the fact that Singapore was expelled in 1965 from the Federation of Malaysia by unconstitutional, unlawful and illegal means. It’s an open secret that then Malaysian Prime Minister Tunku Abdul Rahman had the doors of Parliament locked until the MPs agreed to the expulsion of the city state from the Federation.

The general consensus across both sides of the Sulu Sea is that the Sabah/Sarawak issue will not go away unless there’s a final resolution one way or another. In the absence of a final resolution, the security of both Sabah and Sarawak will continue to be compromised and thereby affect investor and consumer confidence.

Singapore Application would be a continuation of Pulau Batu Putih case

If Singapore is featured as well at the same time that the cases of Sabah and Sarawak are considered, it would amount to a revisitation of the Pulau Batu Putih hearings which saw the island of a few rocks being awarded to the city state.

The Singapore Application could be made by the Government of that island or vide a Class Action Suit commenced by concerned citizens seeking closure on an issue which has bedevilled relations on both sides of the causeway since 1965.

The descendants of the nine heirs of the defunct Sulu Sultanate claim that they have private property rights to Sabah or parts of it. They further claim and/or used to claim that sovereignty over Sabah rests with the Philippines Government.

This is a grey area since one Sulu Sultan apparently “transferred” his sultanate’s sovereignty over Sabah to the Manila Government by way of a Power of Attorney which has reportedly since expired.

Jamalul Kiram III claims to be Sultan of Sulu.

Sulu claimants, Nur Misuari don’t have a leg to stand on in Sabah, Sarawak

At last count there were some 60 claimants to the Sulu Sultanship, not all being descendants of the nine heirs of the defunct Sulu Sultanate.

The Judge ruled that the nine heirs, as the beneficiaries under the will of the late Sultan Jamalul Kiram, who died at Jolo on 7 June 1935, are entitled to collect a total of RM 5,300 per annum from Sabah in perpetuity for having foregone in perpetuity the right to collect tolls along the waterways in eastern Sabah.

The reference point was the deed of cession made between the Sultan of Sulu and the predecessors of the British North Borneo Chartered Company on Jan 22, 1878, and under a confirmatory deed dated April 22, 1903.

If the descendants of the nine heirs end up at the ICJ in The Hague, there are no prizes for guessing which way the case will go. The Sulu claimants don’t have a leg to stand on in Sabah.

Nur Misuari ready to do battle with a battery of lawyers

The Sulu Sultans of old were extorting tolls, virtually a criminal activity, from the terrified traffic along the eastern seaboard of Sabah. The Brunei Sultanate meanwhile denies ever handing any part of Sabah, or the right to collect tolls along the waterways, to Sulu.

The British North Borneo Chartered Company had no right whatsoever to enter into negotiations on behalf of the people of Sabah with anyone.

The entire land area of Sabah, by history, Adat and under Native Customary Rights (NCR), belonged to the Orang Asal (Original People) of the Territory.

Likewise, Sarawak’s independence was re-affirmed on 22 July, 1963 when the British left. Sarawak had been an independent country for over 150 years under its own Rajah until World War II intervened and the Japanese occupied the country.

The war over, the British coerced the Rajah to hand over his country to the Colonial Office in London because they had plans to form the Federation of Malaysia with Sarawak as one of the constituent elements. British occupation of Sarawak was illegal and an act of piracy.

Nur Misuari claims that Sarawak had belonged to his family, from the time of his great great grandfather. He claims that he has the services of the best lawyers at his disposal to make his case at The Hague.

Cobbold Commission a scam by British and Malayan Governments

The outcome of any hearing at The Hague will be a forgone conclusion: the Sulu and Nur Misuari petitions will be struck out without even a hearing; the Court will rule that the people of Sabah and Sarawak never agreed to be in Malaysia; and Singapore will hear that its expulsion from Malaysia in 1965 was unconstitutional, unlawful and illegal.

The people of Sabah and Sarawak must be given the right to intervene in the Applications at the ICJ which will determine their fate. There’s nothing to prevent the people of Sulu and the southern Philippines from throwing in an Application that the Philippines Government has no business to occupy their traditional Muslim homeland.

The people of Singapore decided in a Yes or Note Vote in 1962 to the idea of independence through merger with Malaya via the Federation of Malaysia. The inclusion of Orang Asal-majority Sabah, Sarawak and Brunei was to facilitate the merger between Chinese-majority Singapore and non-Malay majority Malaya.

Brunei stayed out of Malaysia at the 11th hour after an armed rebellion in the Sultanate against the idea of Sabah, Sarawak and Brunei being in Malaysia.

No Referendum was held in Sabah, Sarawak, Brunei and Malaya on Malaysia. The Kelantan Government even took the matter to Court.

A sampling of community leaders conducted by the Cobbold Commission found that only the Suluk and Bajau community leaders, perhaps sensing some personal benefits for themselves as proxies of Muslim-controlled Kuala Lumpur, agreed with the idea of Malaysia.

Revolution another possibility to finish off Sulu, Nur Misuari, Manila

The Cobbold Commission disingenuously declared that two third of the people in Sabah i.e. Suluk/Bajau + Orang Asal supported Malaysia. The Commission made the same declaration in Sarawak where only the Sarawak Malay community leaders supported the idea of Malaysia for self-serving reasons.

When Singapore was expelled from Malaysia, Sabah and Sarawak – the facilitators of the merger between Singapore and Malaya – were not allowed to exit the Federation. This is a crucial point which will feature at the ICJ.

Security became an afterthought. But as the continuing influx of illegal immigrants into Sabah and Sarawak, and the Lahad Datu intrusion, has proven, there has been no security for both Borneo nations in Malaysia. ESSCOM (Eastern Sabah Security Command) and ESSZONE (Eastern Sabah Safety Zone) comes too little too late, after 50 years.

In the unlikely event that the ICJ rules in favour of the heirs of the defunct Sulu Sultanate and Nur Misuari, it would be the sacred duty of Sabahans and Sarawakians to launch a Revolution and decapitate all the claimants to their countries from the Philippines.

This would bury the issue once and for all and shut up the Manila press and the Philippines Government.

Singapore’s re-admission to Malaysia, if it materialises, would not persuade Sabah and Sarawak to join the Federation as well. The people would want Malaya even quicker out Sabah and Sarawak. It would be the end of a long drawn out nightmare.

Joe Fernandez is a graduate mature student of law and an educationist, among others, who loves to write especially Submissions for Clients wishing to Act in Person.

He feels compelled, as a semi-retired journalist, to put pen to paper -- or rather the fingers to the computer keyboard -- whenever something doesn't quite jell with his weltanschauung (worldview). He shuttles between points in the Golden Heart of Borneo formed by the Sabah west coast, Labuan, Brunei, northern Sarawak and the watershed region in Borneo where three nations meet.