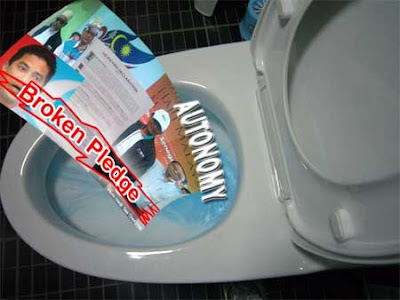 THERE is tremendous appeal to go to poll this time, never before according our observation1. This euphoria iseither designed bya genius or by coincidental stupidity-dragging GE13 right to the edge, that is. The answer would be known only after polling of GE13. Of which, which group of political parties form the government?

But lots of unknown qualities as to Sabah local political parties are concerned, andthis is where Peninsula leaders may be taken off guard. What happening in Peninsula may not be the same as in Sabah?Sarawak has proven in its last State GE, how many seats did Pakatan won?

In the 1975 USNO coalition government was defeated by newly created BERJAYA, and the scenario was repeated in 1985 when another newly and harshly formed PBS defeated BERJAYA.  At that time it was Mahathir’s remark ‘sink and swim with Harris’ among the determining factors

In the 1994 BN didn’t win GE in the State of Sabah. BN formed the State Government due to subsequent crossed over by PBS Assemblymen to BN. If the same person jumps again it’s only normal.

The same style like what happened to Perak State Government in 2008, Pakatan Rakyat Assemblypersons defected to BN because of money. Let me repeat who jumped? Answer is, the PR assemblypersons.

But in Sabah, in 2008something opposite happening, it’s the BN Governmentpoliticians quitted BN Governmentinstead, forming the opposition until to the very day.

No politicians of Malaysia dared to present a motion of a vote of no confident to the Prime Minister in the history of Parliament of Malaysia but Sabah’s politicians did; its Progressive Party (SAPP)

SAPPhas been built on the non-racial platform right from its inception no issue of Chinese domination just because it President is, convenient only for UMNO and some fellow opposition who disagree or out of jealousy.

SAPP has young and dynamic professional leaders in the making and well set to take up the challenge to make Sabah stands high.