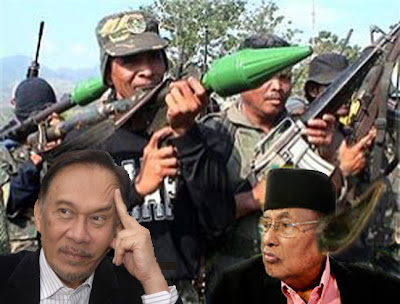 THERE IS quite a bit of material in the mainstream and alternative media hinting, suggesting and even accusing Opposition Leader Anwar Ibrahim as the arch villain behind the Lahad Datu intrusion and subsequent standoff.

As the various conspiracy theories go, this is the weakest of them all. We can only await the proposed Royal Commission of Inquiry (RCI) on Lahad Datu with bated breaths.

However, such meetings by themselves tell nothing. Both men were longtime friends. The MNLF Leader may have wanted to catch up with the Opposition Leader because he’s also the Prime Minister in Waiting.

Moreover, Prime Minister Najib Abdul Razak was then facilitating a peace process in the Philippines south without the MNLF. That could have been the only serious issue featured in the two reported Anwar-Nur Misuari talks.

When Nur Misuari found that the Prime Minister of Malaysia had turned his back on him in the wake of the peace process, he could turn nowhere else but the Prime Minister in Waiting. This is akin to visiting western leaders not only calling upon the head of state and head of government of a country but also making time to meet with the Opposition Leader.

Any suggestions that the Lahad Datu intrusion happened because Anwar wanted to swing the Suluk votes his way simply doesn’t add up. It’s Umno which has immediately added 12,000 postal votes in eastern Sabah in the wake of Lahad Datu.

Anwar may not have been banking on winning any Muslim seat in Sabah. He can only favour Sabah Umno crossing over en bloc if Pakatan Rakyat (PR) can seize the reins of power in Putrajaya.

If the Suluk seats were shaky for Umno before Lahad Datu – they may still be -- it will be more due to the pro-tem United Sabah National Organisation (Usno) which has been making inroads in the 20-odd Muslim seats once held by the party before it was deregistered to make way for Umno.

The Registrar of Societies (ROS), for all practical purposes, has refused to re-register Usno and this has caused considerable anger among the community. It’s viewed as a kind of betrayal.

Ironically, the Suluk and Bajau community leaders were the only ones who agreed to the formation of Malaysia. The Orang Asal community – Dusunic and Murutic groupings -- leaders wanted a period of independence before considering the idea of Malaysia again and asked for further details to be used for future reference. The Chinese leaders were against Malaysia.

In Sarawak, the Sarawak United People’s Party (Supp) even backed the local communists who operated from their jungle hideouts against the inclusion of their state in Malaysia.

Classification of voters in Sabah not acceptable. There was No Referendum on Malaysia.  The people were not consulted.

The Suluk and Bajau communities have been complaining about being marginalized and disenfranchised ever since 1963 by the increasing influx of illegal immigrants from Celebes and other places. The response of the Umno leaders, according to Usno vice president Abdullah Sani, is that the influx of illegal immigrants was okay since they were all Muslims.

This is unacceptable to the Suluks and Bajau.

The Suluk in particular are against the continuing Bugis influx. There’s no love between these two groups.

It may make perfect sense to self-serving Umno leaders’ sitting in air-conditioned comfort in Putrajaya but it comes across as not practical and realistic to Sabahans. In Malaya, the Malay-speaking communities viz. Bugis, Javanese, Minang, Acehnese, Arab Muslims, Indian Muslims and the like are all classified as Malay in the electoral rolls.

In Sabah, Putrajaya decided that the equivalent was Muslim Bumiputera. Again, it may be a convenient and politically expedient label to the Umno Government but the consensus of the man in the street is that it masks problems within the Muslim communities.

Jamalul Kiram III could only be after more money

The Suluks, like other Sabahans, would have preferred voters in the state being classified, as reality on the ground dictates, into Orang Asal including Muslim; Suluk; Bajau; Other Muslims; Chinese; Others. The Other Muslims include the Brunei Malays or Barunai, Irranun and Banjar, among others. Orang Asal Muslims cover the Bisaya, Orang Sungei and Ranau Dusuns. The majority of the Orang Asal are Christians.

The Suluks also can't understand why they cannot have their own political party, Usno, and why it was deregistered when Umno came to Sabah.

The unhappiness of the Suluks in particular is the only thing that makes sense in view of the Lahad Datu intrusion but not that they are involved The so-called Sulu Sultan, Jamalul Kiram III, obviously knew that sentiments among the Suluks were against Putrajaya and Umno in particular.

He may have then decided that it was time to strike for more money from Putrajaya by using the moribund Sabah claim as the fig-leaf. The news along the political grapevine is that Jamalul Kiram had been engaged in on and off talks with Putrajaya for over a year until they were called off sometime last year before the peace process in the southern Philippines was put together.

Jamalul apparently wanted more money against the measly RM 5,300 per annum that he has to share with the descendents of the other eight heirs of the Sulu Sultanate.

Mopping up in Lahad Datu fast turning into a farce

If Jamalul had expected the Suluks in Sabah to rise up and rally to his cause, he was sadly disappointed. No Suluk in his right mind in Sabah would ever want the state to be part of the Philippines or even Sulu. The Suluks fled the Philippines to get away from the Manila Government. It makes no sense now for them to root for a Government which they despise.

Patently, the odds are that other conspiracy theories on Lahad Datu are more credible than that linking Anwar with the bloody intrusion in recent weeks which is fast turning into a farce in the mopping up stage.

It remains to be seen how all this will be spelt out in the forthcoming long-delayed 13th General Election. If the security forces even suspect that Putrajaya has blood on its hands in Lahad Datu, there are no prizes for guessing which way the additional 12, 000 postal votes in eastern Sabah are going.
Posted by sabahkini.net at 01:00