MUSA PRAISES WOMEN FOR THEIR ROLE 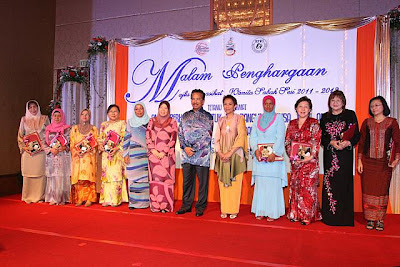 WOMEN’S leading role and contributions towards Sabah’s development and advancement have not gone unnoticed by the State Government.

“We recognise that women have played an integral part and rendered invaluable contributions in assisting the government to develop Sabah,” said the Chief Minister at the 2011-2012 Sabah Women’s Advisory Council or MPWS Appreciation Dinner held in Shangri-La Tanjung Aru and Resort Spa recently.

“Women make up an important component of human capital. Their role in the development of the national economy has become increasingly significant.”

“I must emphasize that the close cooperation between the Sabah Women’s Advisory Council and the State Government should be continued and intensified as we move forward to become a prosperous and peaceful developed state.”

“As a husband I know that my wife has, and women in general have, directly or indirectly, made tremendous contributions to the family, society and to the state,” he said.

“This is why we are ready to entrust women to hold important positions in government and government–linked organisations,” he added. “I have no hesitation to give women a chance to be in the forefront of government departments or agencies.”

Citing the Usaha Maju Foundation’s experience with women’s excellent loan repayment record, Musa said enterprises run by women should be supported. He said women have a proven record of being trustworthy.

On the appointment of 2013/2014 MPWS members, the Chief Minister said, “I extend my best wishes and congratulations to those of you who will be appointed MPWS members for the period 2013/2014.

"Accept your appointment and the heavy responsibility that goes with it, and make a real effort to maintain the excellent record that women as a whole have achieved in contributing to the progress and advancement of the state.” (Insight Sabah)