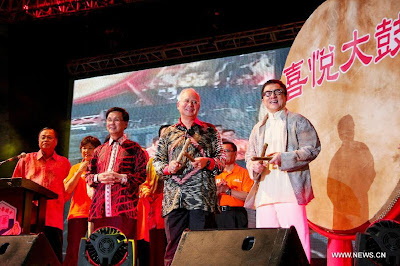 THE BARISAN Government Prime Minister Najib gave a small token sum of RM3 million to the Kuantan Chinese Independent Secondary School for their school building fund which is amounting to some RM30 million.

The same night the Chinese community raised a sum more than RM10.50 million from their fund raising dinner with the help from the famous actor Jacky Chan.

In the Kuantan case is already a clear indication of the wrong and unjust doing of the BN government. They talk about fairness in all races and all races are taken care of, but in the real sense, they are very bias and unfair. The government should give at least on a “one to one” basis, ie. School raised one Ringgit and the government to grant one Ringgit.

In Sabah, many Chinese primary and independent Chinese secondary schools did not get enough government grant but have to raise the needed school building fund with the help from their Parent and Teachers Association, the Management Board and the Alumni Association.

The fund raising event is all hard work, and without the kind contribution in cash and kinds, the fund raising event will not be successful. The Kuantan case with the help of Jacky Chan is so successful, but the real contribution with the hard cash and hard work is still from the people of Kuantan. For this we must give them the utmost salute and respect for Chinese education.

The KK MP Hiew King Cheu said that it is rather sad the PM said that the school is allowed to conduct examinations both in SPM together with the Chinese Unified Certificate Examination. He did not announce the recognition on the Chinese unified certificate.

In Malaysia the government had announced recognizing hundreds of China Universities and some Taiwan Universities. These are the Chinese universities who recognize and accept the Unified Certificates results as their entry qualification and requirement to their university.

It is a pity that Malaysian government until today does not want or refused to accept this examination result and certificate as the qualification to enter our local national universities like UM, UKM, UITM, and many others. This is not fair because the standard of the Unified Certificate may not be lower than the SPM and if not better otherwise.

MP Hiew wants the government to immediately announce to accept and recognize the Unified Certificate for those who faced difficulty in seeking jobs and to further their studies. The funding to the Independent Chinese Secondary Schools should received and be given enough government funding to meet their expansion program or for their new school premises projects.
Posted by sabahkini.net at 09:04