BY THE STARS AND MOON IN THE SKY 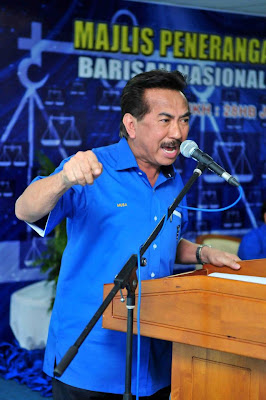 You may write me down in history
With your bitter, twisted lies,
You may trod me in the very dirt
But still, like dust, I’ll rise.

Does my sassiness upset you?
Why are you beset with gloom?
‘Cause I walk like I’ve got oil wells
Pumping in my living room.

Did you want to see me broken?
Bowed head and lowered eyes?
Shoulders falling down like teardrops.
Weakened by my soulful cries.

Does my haughtiness offend you?
Don’t you take it awful hard
‘Cause I laugh like I’ve got gold mines
Diggin’ in my own back yard.

Although Angelou wrote this in the context of her protest against White racism, it is almost as if a large portion of this poem was written with Musa Aman in mind. In the recent decade, there has been continuous allegations and abuses hurled at him. No invective has been left unused while abusing him. The Pakatan Rakyat and its major and minor cohorts in the media have carefully indulged in a systematic campaign of Musa’s character assassination. Despite this, their efforts have gone in vain because he’s won election after election with a two-thirds majority. That’s not all. In the ensuing 2013 13th general elections, there’s every indication that he is likely to be the Barisan National Sabah’s Chief Ministerial candidate again.

If that happens and UMNO declares Musa Aman as their Chief Ministerial candidate, let no doubt remain that this poses the biggest danger to Pakatan Rakyat, SAPP and Star Sabah. And it is to prevent this exact situation that the fragmented Sabah opposition is working overtime. The Assembly Elections scheduled from anytime now till May 2013 will witness yet another victorious Musa Aman. It takes 31 seats to capture the 60-member Sabah State Assembly. However, if the Barisan National under Musa Aman manages to garner a tally 35, it will be portrayed as a defeat of Musa Aman. This is why the fragmented Sabah Opposition is willing to stoop down to any level to ensure that the Barisan National bags a figure under 35. The electronic media as usual, has become a willing handmaiden to aid the Pakatan Rakyat, SAPP and Sabah Star in its every nefarious move. However, this time around, many have already begun to shed light on these dirty tricks.

According to a Pakatan Rakyat strategist, PKR has identified two ways to accomplish this. The first is the one it implemented in Selangor and Sabah. In Selangor, the Pakatan Rakyat capitalized on the Umno’s infighting and its in-house traitors thereby wrecking the opposition Barisan National. In Sabah, it has already yoked up the disgruntled Umno elements in the form of Lajim Ukin and Ibrahim Menudin, and has pitted them against Musa Aman. The second way is vile way of direct, open character assassination. But why is the Pakatan Rakyat after Musa Aman with such zeal? What is it about him that’s giving it sleepless nights?

Today, the only state which stands between Anwar Ibrahim and the Prime Minister’s chair is Sabah. Obviously, What is stopping Anwar Ibrahim from becoming Prime Minister is Musa Aman. Anwar Ibrahim needs at least 20 Parliamentary seats out of the 25 Parliamentary seats from Sabah for his dream to become Prime Minister to become a reality. Musa Aman controls the bulk of the Parliamentary seats in Sabah. The argument that Musa Aman allows for corruption is shallow and the opposition front is very aware of this fact. Historically, corruption in Malaysia has always been connected to both government and opposition, who are both equally corrupted, a fact that the opposition front is well-acquainted with. However, they repeatedly uses the corruption card for obvious reasons. In the present day, using the same card to discredit Musa Aman has become over played, and if we allow such divisive politics to succeed, we can only shudder at the future of this nation.

The fact is that despite numerous attempts over the last 10 years, the opposition front has been unable to find even one flaw in Musa Aman. Why?
Well typically, every successful politician or leader or public figure has a team or at least one shrewd adviser who guides and advises the leader on various matters. Tun Mustaffa had a Syed Kecik, Pairin Kitingan had a Dr Jefrey Kitingan before he went under ISA, Dr Mahathir had Daim Zainuddin and Abdullah Badawi aka Pak Lah had son-in-law Khairy Jamaludin, and so on. In present day politics, this applies to a Lim Guan Eng who had Daddy Lim Kit Siang and Uncle Karpal Singh, Tan Sri Khalid Ibrahim who had Anwar Ibrahim, Taib Mahmud who had a Bomoh, Anwar Ibrahim who had Azmin Ali, Najib Tun Razak had Rosmah Mansor. None of these leaders took any decision without first consulting their advisers and every decision once taken, has the imprint of their adviser in some form or the other.

If this is the case—an age-old precedent—who is this one person who advises and guides Musa Aman?

There’s no answer to this question because Musa Aman is his own King and wise counsel. Historically, the opposition front is known to “book” such advisers and exploit the weakness of the adversary through this key person. However, despite painstaking efforts spanning a decade, the opposition front encountered a solid wall in the case of Musa Aman because—apart from having no adviser, he is clean. Of late, the opposition front has explored the avenue of trying to tarnish him through his family and distance relatives—for example, a distance relative Manuel Amalilo aka Mohammad Suffian Syed who scammed 15,000 Filipinos of 12 billion pesos (RM895 million) in a ponzi scheme in Philippines is purportedly engineered by Musa Aman. However, even this turned out to be a dead end. The handlers and the dirty tricks department of the opposition front apparently found out that Musa Aman isn’t in politics for selfish ends, and was forced to accept the fact that Musa Aman’s interest lay in Sabah’s interest. It’s left to our imagination as to the future of Sabah if a man like this becomes Chief Minister again for the 4th term.

This is the reason Musa Aman has captured the imagination of the Sabah masses.

He comes across as an introvert. It’s hard to predict when he speaks or when he doesn’t. By himself, he’s a great strategist. In the 2008 Sabah assembly polls, he steered the Barisan National to more than two-thirds majority winning 59 of the 60 seats contested, without calling in any central leader from the party to the campaign trail. This is because of the confidence that comes from demonstrating performance and delivering clean governance. Thus, it’s clear that he’s the only leader in Malaysia who can mount an effective opposition to Anwar Ibrahim becoming Prime Minister. One of the easiest slurs to assassinate the character of a person is to brand him corrupt and a womanizer. So the Chinaman Micheal Chia’s story will be recycled over and over again stooping to a new low. And that’s not all—according to Pakatan strategist, the Pakatan Rakyat is pulling no stops. It has created an entire “stop-Musa” machinery by roping in all sorts of activists, media persons, and disgruntled UMNO Sabah elements. Yet, as Maya Angelou says:

Just like moons and like suns,
With the certainty of tides,
Just like hopes springing high,
Still I’ll rise. You may shoot me with your words,

Let Musa Aman rise, vanquish his opponents and lead Sabah towards progress and prosperity.
Posted by sabahkini.net at 09:08