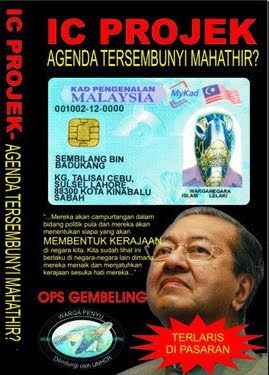 USURPING..... The more Dr Mahathir defends Project IC, the closer the opposition gets to usurping Barisan Nasional in the coming polls.

KOTA KINABALU: Former Prime Minister Tun Dr Mahathir Mohamad may be the best thing that has happened to the opposition in Sabah, according to a state Barisan Nasional coalition member.

Mahathir’s continued comments on the clandestine ‘Project IC’ that was in operation during his tenure is only serving to rile up voters in the state against the BN, said Parti Bersatu Sabah (PBS) supreme council member Chin Tek Ming.

Chin fears his party could suffer at the polls because the former premier’s unguarded comments justifying the granting of citizenship to immigrants in the state was only angering Sabahans more.

He urged the 87-year-old Mahathir to think carefully before he gave his opinions on such a sensitive subject as he was only spurring the hatred of Sabahans since he was the prime minister at the time tens of thousands of ineligible immigrants were granted citizenship.

Chin, who is also Luyang PBS division chief, said Mahathir cannot just absolve himself of blame by saying that a few government servants had acted illegally but he was unaware of it at the time.

He said senior government officers would not dare to do such things as getting involved in the distributing of Malaysian identity cards to foreigners if not given orders by someone senior in government.

“Don’t treat Sabahans as fools. We were and still are victims of this misfortune. Look at what is happening in Lahad Datu that had cost the lives of our enforcement team who also have families.”

Chin was commenting on the statement by Mahathir who claimed that the Project IC was done by a few senior government officers as revealed in the Royal Commission of Inquiry.

The question of how unqualified foreigners obtained Malaysia citizenship and how the population suddenly spiked just before the 1994 state election that led to the ouster of the PBS government has always haunted Sabahans and enraged them.

Chin said: “We Sabahans already have so much hate for this misfortune and yet Tun Dr Mahathir still puts salt on our wounds by making such statements.”

The PBS leader however had a word of praise for Prime Minister Najib Tun Razak for being brave enough to set up a Royal Commission of Inquiry to investigate the immigrant issue. (FMT)
Posted by sabahkini.net at 08:11