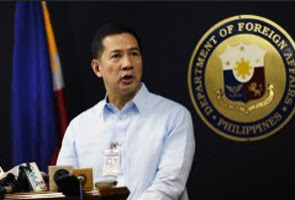 MANILA: The Department of Foreign Affairs (DFA) reminded government agencies yesterday of a government directive not to refer to Sabah as part of Malaysia.

DFA spokesman Raul Hernandez said Malacañang issued Memorandum Circular 162 dated Aug 20, 2008, entitled “Guidelines on Matters Pertaining to North Borneo (SABAH)” to government departments with regard to any act or statement expressing or implying, directly or indirectly, any recognition of a foreign state’s sovereignty over Sabah, a Philippine territory.

Hernandez clarified that the circular was issued by then Executive Secretary Eduardo Ermita by authority of then President Gloria Macapagal-Arroyo, after it was raised in a discussion at a meeting of the National Disaster Risk Reduction and Management Council (NDRRMC) on Monday.

“I understand that the subject of whether or not to refer to Sabah as being part of Malaysia was mentioned in that meeting,” Hernandez said.

The Philippines has always maintained historical and legal rights over Sabah.

The Philippine Star reports the circular was issued because of the need for guidelines with regard to activities, acts or statements in relation to Sabah for the protection of rights.

The DFA said the “existing circular has not been amended or changed yet”.

The circular provides that “No department, agency, or instrumentality of the Philippine government shall make any act or statement expressing or implying, directly or indirectly, any recognition of a foreign state’s sovereignty over North Borneo [Sabah] or non-recognition of Philippine title or historical and legal rights to the same”.

Section 3 of the circular provides that reference to North Borneo (Sabah) in official documents should not include its being part of a larger national/federal territory.

Meanwhile, a relative of Sultan of Sulu Jamalul Kiram III was reportedly killed in Semporna, Sabah, after Malaysian authorities had arrested him.

Abraham Idjirani, sultanate spokesman, said Ustadhz Jamjam is a known religious leader in Semporna and in Jolo, Sulu, and not a member of the Sulu royal security force.

“I can’t remember his family name but he is a long-time resident of Semporna, having lived there since the 1990s,” he said.

Malaysian authorities arrested Jamjam a week ago and he was reported dead either last Monday or Tuesday, Idjirani said. (Agencies)
Posted by sabahkini.net at 11:42