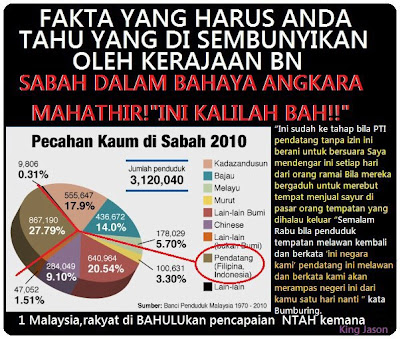 INVASION....Sabah's population of 3.2 million includes 1.5 million documented and undocumented Filipinos and the backlash of the recent invasion has 'united' the Filipinos in Sabah and in Sulu.

KOTA KINABALU: Sulu sultanate spokesman Abraham Idjirani today slammed the Malaysian security forces for restricting the movements of Filipino residents in Sabah to such an extent that these frightened individuals now want to return to the Philippines.

“It is a psy-war by Malaysia to force the Filipinos to leave,” Idjirani said, adding that with the end of the standoff a new reality had emerged for Malaysia.

He said the Sulu sultanate was adamant on its claim for Sabah and this was seen as a threat to Malaysia.

Idjirani said Sabah’s population of 3.2 million included the 1.5 million documented and undocumented Filipinos and the “war” waged between the sultanate’s army and the Malaysian securities forces had “united” the Filipinos.

“Malaysia is now afraid. It knows that with the standoff now, the Filipinos are being united by the Sabah issue,” Idjirani said.

He said the sultanate through Manila will push for a United Nations-sanctioned referendum to be called on Sabah.

“Malaysia is afraid that it might lose Sabah in a referendum should the UN call for one,” he added.

Meanwhile, the Philippine Embassy in Malaysia said thousands of Sulus who had entered Sabah illegally are taking up its offer to return home and “re-enter” Malaysia legally.

The embassy, which has been monitoring the situation here following the shootout between armed Sulu insurgents and local securities forces on 1 March, said that it has been distributing the legal documents since March 12.

Philippine ambassador Abdulhan U Jaujan said the Philippine government was offering the Sulus “a ticket home”.

“The offer is for those who had entered the state illegally or [residing] Suluks as well as Filipino nationals who were born in Sabah but have yet to obtain documents.

“We are providing them with the legal travel documents, such as passports. We are also helping settle any fines imposed by the Malaysian Immigration Department including their transport costs,” he said.

Abdulhan said the offer was also extended to Sulus who were married to locals in Sabah.

He said thus far more than 300 Suluks had left Sabah via Sandakan, the key entry and exit point for Filipinos living in Tawi-Tawi and Jolo in southern Mindanao.

The Philippine Department of Social Welfare and Development (DSWD), meanwhile, said its relief teams have been on standby in Tawi-Tawi and Sulu to give aid to the Filipinos fleeing from the tension and recent violence in Sabah.

Thus far, the teams have assisted more than 3,000 evacuees from Sabah.

On a related matter, online website, the Philippine Star, reported that the Council of Royal Sharifs had earlier this week gathered all the Datus and heirs of the sultanate from Sulu, Basilan, Tawi-Tawi and Palawan together and signed a manifesto detailing their unified stand to reclaim Sabah.

The Council of Royal Sharifs are assets protector and comprise heirs, and descendants of the sultanate of Sulu.

A spokesman for the Royal Sharifs, Tupay Loong, said they had conducted consultations and had initiated efforts to bring all claimants together to speak as one voice to force Malaysia to return Sabah to the sultanate.

The group also appealed to the UN, the Organisation of Islamic Cooperation (OIC), the Association of Southeast Asian Nations (Asean), the Non-Aligned Movement (NAM), and the Philippine government to intervene to end the hostilities and to stop the violation of human rights in the Sabah crisis.
Posted by sabahkini.net at 11:01