GE13: WHAT’S AT STAKE FOR MALAYSIA? 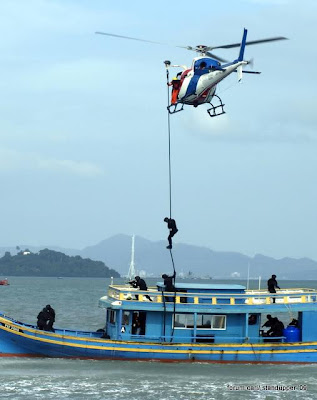 MALAYSIANS of all walks of life will soon go to the polls to take part in an election, the outcome of which will have long-ranging implications that could see significant changes in how the country is governed.

The incumbent leader, Najib Razak, is campaigning for his first mandate at the polls, and his government has legitimized itself through its growth-promoting management of the economy and a series of populist measures aimed at lifting the burden on the poor.

The opposition coalition, which has vowed to eliminate authoritarianism and elite graft, has released a manifesto that some have lauded, while others have been more skeptical of by questioning how the coalition plans on executing many of their programs.

The dissolution of parliament is just around the corner and it cannot be denied that many are dissatisfied with the status quo, and there is a large demographic of young voters who want to challenge the ruling coalition’s infallibility at the polls.

The surfacing of contentious issues close to election-time has created a notable climate of disillusion in Malaysia’s critical blogosphere. Among those are concerns that immigrants in Sabah were given citizenship and voting rights during Dr. Mahathir’s era on the condition that they vote in favor of the ruling party.

The recent exposé documenting members of Taib Mahmud’s family openly talking of skirting Malaysian tax law has gone viral, putting enormous pressure on Najib’s administration to take action. Many, especially among the young, feel animosity toward the government for the way in which the Bersih demonstrations were dispersed.

These factors do not bode well for the ruling party, but despite the shortcomings that should rightfully be addressed, it should be acknowledged that from a developmental point of view, Malaysia has historically been among the top-tier of well-governed countries in the region and the ruling coalition has been very successful in numerous areas.

The Naijb government has undeniably had success in delivering high-economic growth to Malaysia. This should not be easily shrugged off by the frustrated voter, especially considering the lackluster state of the global economy.

In recent times, economic turmoil has ensued throughout the European Union as a result of negligent mismanagement and the primacy of finance capital. Cyprus has been in uproar over a bill that would make citizens have their personal savings taxed when their government and affiliated bondholders took careless risks.

In the United States, the Obama administration has found itself so indebted, that it was forced to pass the Sequester bill, cutting $85 million from the federal budget, primarily targeting social programs that the downtrodden and the elderly depend on. In both cases, the most vulnerable members of society have been forced to pick up the tab for governments and investors that have recklessly managed their economies and instituted punishing belt-tightening austerity measures.

In stark contrast, the Najib administration has extended its hand to the poor – be it single mothers, taxi drivers, low-earning families or young entrepreneurs – by introducing a wide range of credit schemes, vouchers, and subsidies that have helped the pace of development.

Malaysians often overlook the fact that Malaysia has one of the lowest inflation rates in the world, the Najib government has made it a priority to implement people-friendly policies and programs of social uplift, exactly what the people of Greece, Spain, and Portugal have been asking their bureaucratic leaders for.

Najib’s 1Malaysia program, the central backbone of his populist policies, has been criticized for lacking substance. One should note that the current leadership is trying to deemphasize ethnicity, and in a country where complaints of race-politics are commonplace, this should be rightfully seen as a welcoming development.

There is no doubt that the current leadership is well aware of the criticisms and the short-comings, hence the emphasis being placed on economic and governmental transformation programs that have the potential to deliver increased stability and bring about an economic climate where more bold reforms are possible in the near-future.

The fervor and passions of the Arab Spring revolts are something that, for better or for worse, inspired many throughout the world to take a bold position against the status quo in their countries in a series of solidarity protests that emerged everywhere from Manhattan to Khartoum.

Malaysia’s opposition leader has also attempted to invoke the passions of the Arab Spring, and as a result of that, it is the opinion of this observer that a great deal of Malaysia’s political discourse downplays or tarnishes the achievements of the country – things are too often presented simplistically and painted black and white. Still, bloggers and dissidents have harnessed the web and it cannot be denied that Malaysia enjoys a high degree of expression related to political pluralism. The toppling of regimes during the Arab Spring revolts in countries like Egypt and Tunisia through non-insurgent means were possible primarily for two reasons.

Discontent was driven by people in those countries because they lived under a far more pronounced model of political subjugation; they lacked freedoms of political association and the economies of those countries failed to deliver meaningful opportunities to the masses.

In the Malaysian context, even with elite corruption and cronyism, there is still a sufficient amount of political breathing space and more prominently, the Malaysian economy is among the most energetic in the region – the optimism that comes with exploring unchartered economic terrain, the prospects of entrepreneurship, and competition can be felt among the people.

For these reasons, Malaysia is not suited for a change in government by means of street action and the like – far too many Malaysians still see themselves being more economically stable and materially advantaged by the status quo.

The opposition coalition does promote some laudable promises in their approach, such as delivering free education, the proliferation of open-tenders, and the pledge to bite down on graft – whether or not this can be achieved is difficult to say.

What should be more immediately concerning is that the most prominent element within the opposition coalition, the Parti Islam Se-Malaysia (PAS), has historically held steadfast to its goal of transforming Malaysia into a Islamic state, one that would adhere to sharia law and Islamic penal code. Given the complex multi-ethnic and multi-religious makeup of Malaysian society, the empowering of a party that promotes such a political program has the potential to deepen social divisions and strain race-relations, and thus, a Malaysian federal government with such a party at its helm could pose serious challenges to the maintenance of racial harmony.

This observer has witnessed many Malaysians (especially among opposition supporters) express their nostalgia for days past, when races more liberally interacted with each other and identity was less of an issue.

Those who hold such sentiments should reflect on the Islamic resurgence that has swept Malaysia throughout the 1980s, the impact of which gave rise to the more pronounced adherence to Islamic fashion, lifestyles and diet.

The issuance of hudud-policies that would follow the empowering of an Islamist party in Malaysia would unequivocally deepen inter-ethnic friction. The aftermath of the Arab Spring in Egypt provides an example that could resemble the Malaysian context, whereby enormous social unrest emerged between secular and Islamist forces after an Islamist party took the helm, followed by severe inflation and economic stagnation in which Egypt remains mired in today.

PAS’s management record in Kelantan and Kedah shows that the party places less emphasis on economic development, focusing more on penal code and the suppression of life style choices that do not adhere to their interpretation of Islam – this is not the kind of change that progressive-minded Malaysians have been calling for and they should not be fooled into giving this party a mandate to lead.

The most pressing concern is that the upward momentum of Malaysia’s growth could be held back as opposition parties embark on their own political and economic programs, effectively derailing the economic transformation agenda to obtain high-income status by 2020, the policy-brainchild of Dr. Mahathir that is still being carried out today with creditable progress.

This kind of analysis is not fear mongering of any sort, but rather a reflection of the unfamiliar terrain Malaysia would embark on if Najib were unable to obtain his mandate. It should be remembered that Najib was not previously elected, and he has had to work within the confines of an administration setup by his predecessor. If Najib were given the mandate to form his own administration, he would have to take a bold and meaningful stance on elite corruption and opulent lifestyles by necessity in addition to passing more popular reforms.

Najib’s primary problem is that his reforms are perceived as cosmetic by a significant portion of commentators, although it is the personal opinion of this observer that the incumbent has undoubtedly moved in the right direction by deconstructing draconian legislation of days past.

Najib’s commitment to addressing the grievances of racial minorities is often intertwined with Malaysia’s longstanding New Economic Policy (NEP), which many Chinese and Indian communities feel economically alienates them as they struggle to penetrate into circles of higher education and high-income employment.

It should be noted that minority communities have been able to practice their culture and religion without hindrance, and pursue their business interests with minimum intervention from the state. On that note, more should be done to reform the NEP by making the elements of the program available to recipients on a needs-basis, and populist schemes associated with 1Malaysia have already began to move in that direction.

Najib’s formation of a Royal Commission of Inquiry (RCI) tasked at getting a clearer picture of Project IC is brave, and that is not often acknowledged. It would be very well received if the incumbent appointed similar investigations into figures like Taib Mahmud, which would help build confidence in institutions that are popularly accused of being toothless in the face of power and wealth.

Sound management of the economy and ensuring the livelihood of the masses is the most immediate concern of Najib’s administration, and in that department, he is succeeding. Among other primary concerns are stringently improving transparency and accountability, institutionalizing firm anti-corruption measures, and the pursuit of an independent foreign policy.

Members of the opposition and senior officials like Dr. Mahathir alike are concerned with Malaysia’s participation in the Transpacific Partnership (TPP) talks, a largely undisclosed US-led free trade agreement. Malaysia’s political independence and sovereignty comes first and foremost, and whoever takes Putrajaya must defend the interests of the people and enhance their happiness and economic well being.

(NOTE : Nile Bowie is an independent political commentator and photographer based in Kuala Lumpur, Malaysia. He covers a wide range of international issues and is not affiliated with any political party. He can be reached at nilebowie@gmail.com)