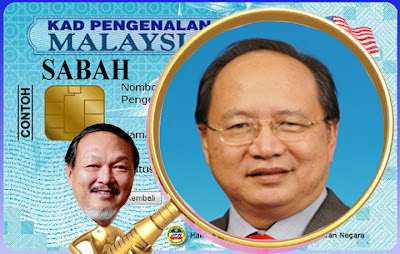 THE PRESIDENT of UPKO Tan Sri Bernard Dompok’s suggestion on collecting back all the Identity cards that have been issued in Sabah are to be returned to the authorities and new ones are re-issued to the Sabahan so as to determine their citizenships. He will propose this also to the RCI on Illegal Immigrant.

The KK MP Hiew King Cheu commented on the suggestion made by Dompok may sound as a noble one, and it will be only good if this can be implemented. Very unfortunately, under the Barisan Nasional (BN) this will not be possible, because it is through their ill administration which had caused this serious situation where many hundred thousands illegal or legal foreigners had gained Malaysian citizenship and became holders of MyCards. Who are to be blamed and put responsible? He choose to say this just before the national general election, it is very clear that he has his own agenda to lure the voters to support BN in the coming election.

If BN is genuine and wanted to carry out this task to resolve the problem which was created by them anyway, they could have done this many years ago while the problem has not been exploded to such a serious scale. It is rather hypocrite to mention this proposal while they themselves are the culprit.

On the other hand, Bernard Dompok was the Chairman of a Parliament Select Committee (PSC) 6 years ago, and he had resigned due to the problems arising. Now he comes and said he would forward his suggestion to the RCI on illegal immigrant.

The question is why he did not accomplished his entrusted duty at that time to investigate on the illegal immigrants problems, and through the number of years there are many more hundred thousands of dubious MyCard been issued.

Why talk now and didn’t act then, and what can he do now? It looks like Pakatan Rakyat will be the one who will be resolving all these problems faced by the Sabahan after all, if PR is being given the mandate by the Sabahan and Malaysian as a whole.

On the part of the NRD (National Registration Department), it is also their responsibility to upkeep their integrity and honesty as a very important key government department. It should not be a tool to any political set up for their own agenda, and be reminded that whatever wrong doing will cause harm to their own follow countrymen and destroying their well being. For example the local KDM races are now becoming the minority races, which have out numbered by the “New Bumiputra”.

It is important to remind NRD that many people with false identities supported by invalid documents had been given Malaysian Citizenships, and many of them were exposed and the persons involved had been punished by the law. In the RCI hearing there were plenty of evident. If the BN government and the NRD can perform their job diligently and with transparency, accountability, and be answerable, all these problems will not occur.
Posted by sabahkini.net at 00:43