SABAH SULUKS ARE NEVER A PROBLEM 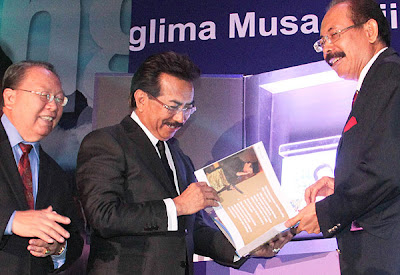 KUDAT: Chief Minister Datuk Seri Musa Haji Aman said there is nothing for the local Suluk community who are citizens of this country to fear as Malaysian authorities stepped up security operations in Sabah.

"It is not right to blame the local Suluk community in the state for the Lahad Datu intrusion because it was not done by them but those followers of (Jamalul) Kiram (III)," he said.

Furthermore, he said many of the people in Sabah have family relationship with the Suluks. "So I don't think there are problems (but) we will defend Sabah until the end from outsiders attempting to invade the state.

We concur with the Prime Minister that Malaysia will never surrender, even an inch of Sabah areas.

"Sabah belongs to the people of Sabah," he said when launching the Yayasan Sabah with the Rakyat Roadshow at the Tun Mustapha Community Centre, Saturday.

Musa, who is also State Security Committee Chairman, said towards this end the Government decided to establish the Eastern Sabah Security Command (ESSCOM) because it felt security should not only be stepped up in Lahad Datu and Semporna but also Tawau, Sandakan and Kudat.

A police station would be immediately set up in Banggi Island, which is located near the international maritime border on the northern waters of Sabah.

"We have agreed that Kudat should also be included in the ESSCOM, which will see five army battalions placed under its perusal to ensure security of the people here.

"This reflected the BN government's concern for the people's wellbeing and safety in Kudat," he said.

It was, however, imperative for the people to continue living in harmony and maintain the existing strong unity among them.

"With the strong support and cooperation from the rakyat I am sure Sabah will continue to enjoy progress," he said.

Later, he also witnessed the presentation of mock cheques totalling RM35,000 for the Lahad Datu Perwira Fund from elected representatives here as well as an individual.

"We are thankful to the Federal Government for beefing up the security forces presence in the East Coast to ensure Malaysia, particularly Sabah is safe. We must have full faith on our security forces," he said.