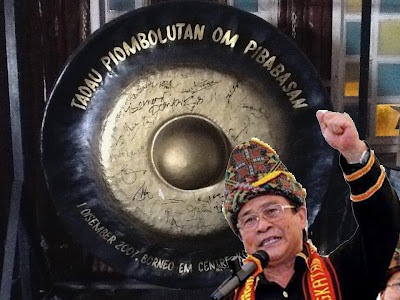 THE so-called show of solidarity and unity among the three KDM BN Components Parties namely PBS, PBRS and UPKO is nothing more than a lame effort of carrying out damage-control by the three leaders aimed at further hoodwinking the KDM community in particular.

Let me refreshed the minds of every KDM leaders that I personally organised similar effort which was carried out on 1st December 2007 with the theme “TADAU PIOMBOLUTAN OM PIBABASAN” (Firendship dan Reconciliation Day) and which was held at Kg. Dalit, Tuaran.

Several KDM leaders from both side of the political divide attended the function the highlight of which was the pledge taken by the three Tan Sris, Bernard Dompok, Pairin Kitingan and Joseph Kurup when the three of them agreed to work together for the betterment of the KDM community.

The three leaders therefore affirmed their commitment by putting their signatures on the huge gong symbolizing the first step towards  what would have been a sincere effort towards realizing a lasting unity for the KDM community.

Tan Sri Pairin at that time in his speech even said that he would be willing to be the catalyst towards realizing the goals of the reconciliation talks. However, for reason best know to themselves, the three leaders have never ever met to pursue the agenda of unity that I have started for them.

Conveniently, the three leaders seem to have finally come to their ‘keinsafan’ (awareness) that the three of them needed each other in facing the people by coining various programs aimed at wooing back support for their respective parties after realizing that they no longer enjoy the support of the people, especially the KDM community.

‘Operasi Tataba,’ which is providing Church Aids to various churches in selected constituency shows a very desperate attempt at wooing back the people’s support, especially from among the Christian community, by bribing the congregations with goodies just before the general elections.

However, the people are not to be fooled by such antics. I have nothing against the kind of church aids being distributed to the various churches, but such aids being distributed at a time when election is just around the corner and when the people’s support are no longer for BN goes to show that such so-called cooperation between the three KDM BN parties at a time when the leadership of the three of them will be hotly tested in the coming general election can be anything but true unity.
Posted by sabahkini.net at 01:08