SAPP UNDERDOG BUT NOT THE RUNNING-DOG 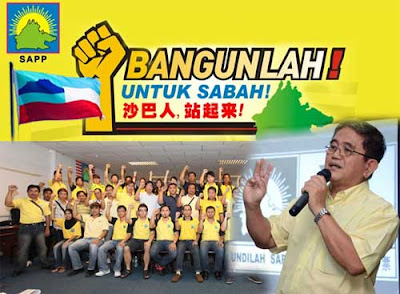 UNDERDOG ....SAPP may be underdog in this situation but we will not be the running-dog and we will stand firm on our principle and will not compromise on state autonomy and rights.

This was clearly revealed by Pakatan Rakyat de facto leader Datuk Seri Anwar Ibrahim's in his announcement that PR will go alone to contest in the Sabah state seats.

"Despite knowing the tough challenge, SAPP will not waver in its mission to defend State rights and to regain autonomy for the State.

"And we will face the two giants, Barisan Nasional and PR in the coming general elections, with dignity" he said in a statement.

"SAPP may be underdog in this situation but we will not be the running-dog and we will stand firm on our principle and will not compromise on state autonomy and rights" he stressed.

He was reacting to Anwar's announcement last Sunday, that Pakatan will go it alone against the BN in the 13th general election. With that laid the hopes of many wanting to see a unified opposition front taking on the BN in one-to-one contests.

Majimbun also set the record straight that SAPP has been having discussions with Pakatan representatives for a few years, on how best to work together to topple BN.

He recalled that in their meetings and discussions with PKR vice president Tian Chua and its deputy president Dato Azmin Ali at the Parliament House, both sides have reached consensus that they will work towards putting Pakatan in Putrajaya and leave the battle for the state government to Sabah-based parties.

Anwar himself had on a few occasions expressed willingness to let SAPP go for more state seats to achieve the one-to-one contest, he noted.

"We began talking (to them) long before the Lajim and Bumburing whose groupings, which are NGOs, have now been incorporated into Anwar's seat distribution equation which has destabilised the discussion and negotiation of seat-sharing among the oppositions in Sabah.

"Pakatan's frequent acceptances of new faces and promising them candidacy replacing the loyalists has incurred the unhappiness of many veterans who stuck with Anwar and Pakatan through thick and thin over the years,

"Now they want to control not only Putrajaya, but also the Sabah State Assembly" he said, adding "That makes them the same like BN wanting to monopolise power and that's the reason we are what we are today ... the poorest state in spite of its rich resources and having to kowtow to leaders in Kuala Lumpur who had no idea what Sabahans aspire.

Majimbun reiterated that the people of Sabah need to re-instate the State's political autonomy in order to resolve the many problems that are being ignored by the Federal Government.

This included the many imbalances in the existing policies, poverty, corruptions and so on, and to propel Sabah's economic well-being with all the resources own by Sabah."
Posted by sabahkini.net at 08:25