WHAT IF BRUNEI NEVER GAVE SABAH TO SULU? 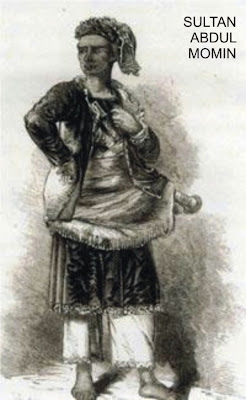 JAMALUL Kiram wants to fine Malaysia RM78 billion for charging eight gunmen for waging a war against the Yang DiPertuan Agong -- and act which the 'sultan' says Malaysia had not right to do because it is merely an occupant of Sabah, the land which "belongs to the Sulu sultanate."

Meanwhile, it's been widely reported that Philippine government has lined up a slew of the best lawyers to study the feasibility of claiming Sabah for the Philippines.

The republic is doing this, despite Aquino's overt support for Malaysia in the Lahad Datu intrusion and attack, to the point that Jamalul Kiram III and Nur Misuari have condemned him for siding with Malaysia and not with his countrymen in Sulu.

But any effort by the Philippines to claim Sabah, even with the most skillful of attorneys (as they are called in the Philippines), would be an exercise in futility because of the overwhelming evidences which have piled up over a century in favour of Sabah and Malaysia.

In the past three installments of this column I have listed quite a few facts of history which would make such a legal suit to claim Sabah pointless and a waste of time for the Philippines.

But there is one point of history favouring Sabah and Malaysia which I hadn't yet touched on, nor had those arguing from both sides of the issue had shown any awareness of it.

This is the critical question of whether Brunei had actually given North Borneo, or parts of North Borneo, to the Sulu Sultanate. The wellknown version of the North Borneo handover says that the sultan of Brunei gave North Borneo to Sulu as the promised reward to the Sultan of Sulu for helping quash a rebellion in Brunei.

Centuries later, the sultan of Sulu then ceded North Borneo to the British North Borneo Company owned by Alfred Dent and Baron Gustavus Von Overbeck. The ensuing argument is whether the cession was in fact a cession or a lease, and the Philippines claims it is the latter. And this is the principal basis of the Sabah claim which was officially declared by Manila in 1962.

However, none of those making the arguments on the issue has ever asked the important question: What if Brunei had never given North Borneo to Sulu? This little-known 'tweak' of history may be very surprising to many, but there appears to be strong veracity in this alternative historical account which assures us that, indeed, such a handover never took place.

To have a perspective of the genesis of this argument, let's look at what transpired then (as related by Rozan Yunos of Brunei Times). At that time the sultan in power in Brunei was Sultan Muhydin (the 14th sultan who reigned from 1673 to 1690). The 13th sultan, Sultan Abdul Mubin, staged a war against Muhydin.

He usurped the throne after killing Sultan Muhammad Ali when the latter tried to stop Mubin from taking his revenge for the death of his son killed by the son of Sultan Muhammad Ali. Mubin then appointed Muhydin as Bendahara but later Muhydin with other followers created disturbances at the capital, forcing Mubin to flee to Pulau Chermin. This then gave Muhydin the opportunity to appoint himself as Sultan.

Thereafter a war ensued between the two, with Mubin fighting from Pulau Chermin as the rebel and Muhydin fighting from the palace as the sultan. Sir Hugh Low (the first man to climb Mount Kinabalu) had written to describe the negotiation between Sulu and Brunei during the war: "...the Bataraa of Soolok went up to Bruni and met the Sultan Muaddin and having feasted and drank, the Sultan asked the Batara for his assistance to destroy the enemies at the island, promising that if the island should be conquered, the land from the North as far as westward as Kimani should belong to Soolook".

Eventually Muhydin triumphed, supposedly due to the assistance provided by soldiers sent by the Sultan of Sulu. The popular story goes that thereafter Muhydin gave North Borneo to Sulu in gratitude for the assistance, as promised. Sir Hugh Low, wrote in the Journal of the Straits Branch of the Royal Asiatic Society (JSBRAS) published on June 5, 1880 under the title 'Selesilah (Book of Descent) of the Rajas of Bruni', that "by the assistance of a force from the Sultan of Soolok, the forts on the island (Pulau Cermin) were captured."

In support of this version of the events HR Hughes-Hallett wrote in the Journal of the Malayan Branch of the Royal Asiatic Society published in August 1940 entitled "A Sketch of the History of Brunei" thus: "...by the beginning of the 18th century, the kingdom (Brunei) had been territorially diminished by the cession to the Sultan of Sulu in the north."

However, it is very interesting that Pehin Jamil Umar, writing in his book, Tarsilah Brunei II: Period of Splendour and Fame (2007), denies this account. He doesn't deny the fact that the Sulus were invited and promised the northern Brunei territory by Sultan Muhydin if they helped him win the civil war against Sultan Abdul Mubin.

What he denies is that the Sulu actually helped Sultan Muhydin in the civil war. Pehin Jamil assures that during the battle for Pulau Cermin, the Sulu forces were supposed to attack the island from Pulau Keingaran and from the sea, but they didn't do so.

Against all the tales of heroic fighting exploits of  Sulu warriors, they were terrified by the resistance of Sultan Abdul Mubin's forces in Pulau Cermin! It was only after Sultan Muhydin had won the battle that the Sulu forces found their wits and courage, went up the island and took the opportunity to take a number of war booties!

Because of this failure of the part of the Sulu soldiers, according to Pehin Jamil, Sultan Muhydin refused to cede the territories promised to Sulu. Pehin Jamil notes that the area was only "claimed" and not "ceded"! Sir Stamford Raffles, writing in his book History of Java (1830), supports this, referring to a claim and not a cession, thus: "on the north-east of Borneo proper (Brunei) lies a very considerable territory (North Borneo), the sovereignty of which has long been claimed by Sulu Government".

Pehin Jamil goes on to write that according to the oral tradition of Brunei, Sulu continued to press their claim. In 1775, (about a century after the civil war), one of the Sulu chiefs went to Brunei in the pretense of looking for fresh water. His group was actually seeking an audience with the then ruler, Sultan Omar Ali Saifuddin I, to pursue their claim on North Borneo.

The Sultan, however, ordered one of his chief wazirs to deal with them, and threatened that if they persisted on their intention, he would have them killed. The Sulus left immediately but thereafter continued to maintain their claim.

This argument (that Brunei never ceded Sabah to Sulu) is supported by LR Wright in her book The Origins of British Borneo (1970), in which she writes: "...indeed, the legitimacy of the Sulu claim to the territory (North Borneo) is in considerable doubt partly because of the unreliability of tarsilas such as 'Selesilah', which in many cases are nothing more than written-down legends to enhance the status of the royal house which produced them."

Such 'legends' are still being created in Sulu and Manila. It is also known that succeeding sultans of Brunei had denied the supposed cession of North Borneo. While Sulu kept pressing with the claim the weight of Brunei tradition denies it.

The current Sulu claim on Sabah is currently resting on the treaty signed by Sultan Jamalul Alam (Azam) of Sulu and British North Borneo Company. But there is a very pertinent question regarding this treaty, which is: If North Borneo was never given to Sulu, and there is no shred of evidence that it ever was, and neither is there any document to prove it, then isn't that treaty invalid and a product of fraud on the part of Jamalul Alam? If so the on-going claim is a huge world-shaking lie based on this fraudulent transaction.

We also need to ask: If North Borneo belonged to Sulu since the 17th century why then did Sultan Abdul Momin of Brunei appoint Baron de Overbeck as the Maharaja Sabah, Rajah Gaya and Sandakan by way of a document signed on 29th December 1877, just one year before the Jamalul Alam-Overbeck/Dent treaty?

This can perhaps be explained as a clever strategy to prevent any trouble from Sulu in the form of attacks or intrusion into Sabah (over which Overbeck held jurisdiction), knowing that Sulu had been claiming Sabah since the end of the Brunei civil war. If that was the motive, then Jamalul Alam was conned big time into not creating trouble for the sake of 5,000 dollars per year.

But whatever the motive was on the 1878 treaty, it is very obviously that in 1877 -- centuries after the Brunei civil war -- the Brunei Sultanate then still believed and maintained that the North Borneo territory was under its control! This therefore proceeds to the great and ultimate implication that the present Sabah claim is totally unfounded, a daring and shameless lie, hence not even worth arguing over, simply because of the high possibility that Sabah never belonged to Sulu!

In any discussion with the Philippines over the Sabah claim, this important argument must be raised with demand of proof of the supposed cession from Brunei to Sulu. And it would do no harm to bring Brunei officials and historians into the discussion.
Posted by sabahkini.net at 07:52