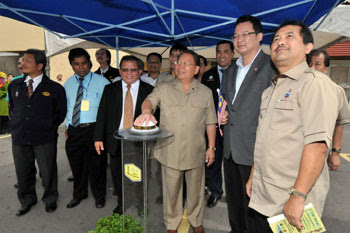 THE state of affairs in Sabah Water Department is alarming in that some districts had yet to be filled with the services of qualified engineers. I have heard that Papar District had yet to be served by an Engineer and that works are being supervised by the District Engineer from Gaya Park, Kota Kinabalu.

Similarly, transfer of experienced engineers from other districts had been purposely delayed by the deputy director on reasons that transfers should only be executed after the general elections.

Rumors are that a Kota Kinabalu engineer had been approved for transfer to Keningau by the Ministry of Infrastructure Development but the transfer had been withheld by the deputy director for reasons known only to himself.

I must stress here that the recent anniversary bash by the State Water Department was blown into disproportion and was grossly unwarranted as the department had miserably failed to address the perennial water problems in the state.

Millions or even Billions of Ringgits had already been spent by the government, both at the state and federal level, to alleviate the supply of water in the state but complaints of insufficient pressure, absence of water from taps, dirty water and so on had been constantly highlighted in the press, both by government leaders as well as individuals.

There are words that the term of the current deputy director is supposed to end in April but had already been re-extended by the Chief Minister’s department for another year.

The rationale behind this extension must be explained to the people as there is no justification to support his continued service given the various problems in the department.

Similarly, the director himself should also be removed from the department and transferred elsewhere as there had been so many reports of improper practices in the department.

One wonders how officers could own Range Rovers, Sports Cars as well as mansions on the salary they are drawing and this should be the concern of the MACC.

As a concerned citizen, I am asking the Minister in charge of the department if he is ever aware of the weaknesses in the Water Department or that he is also closing his eyes.

As the Minister, Pairin should put his foot down on the errant deputy director for ignoring his ministry’s directive on the transfer as it is already insubordination in nature.

I also wonder if the deputy director is withholding the transfer to pave the way for him to continue his plans should the Sabah State government fall to the opposition.

One way or the other, Chief Minister Musa Aman must check on his deputy Chief Minister’s weakness and act accordingly so that the credibility of his government can be safeguarded.