JUST SABAH - NOTHING TO DO WITH MALAYSIA 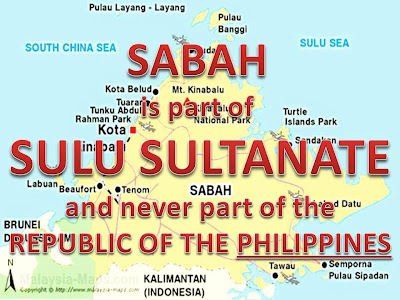 FILIPINOS are supposed to call Sabah as just that--Sabah--without attaching Malaysia to it. A Department of Foreign Affairs (DFA) official brought this matter up on Tuesday, citing Memorandum Circular No. 162 issued by Malacanang back in 2008.

The document directed government agencies to refer to Sabah as just Sabah and not Sabah, Malaysia, Lawyer Roy Ecraela of the DFA Office of the Undersecretary of Special and Ocean Concerns said.

Ecraela issued the statement on Tuesday as different agencies met with the National Disaster Risk Reduction and Management Council (NDRRMC) on Monday to discuss humanitarian aid to Filipinos displaced by the conflict in Sabah.

During the meeting, a representative of the Department of Social Welfare and Development (DSWD) referred to those displaced as the people who left "Sabah, Malaysia."

This prompted an official from the Philippine Coast Guard to ask if government policy has already changed regarding Sabah, which the Philippines still has a claim on.

Can still pursue claim to Sabah

The Supreme Court ruled in July 16, 2011 that the Philippines could still pursue its claim to Sabah, Ecraela said, adding that the decision is separate and different from Memorandum Circular No. 162 and Republic Act 5446 or the Baselines Law.

During the same meeting, agencies agreed to call those coming back from Sabah as "displaced persons" and not evacuees or returnees.

As of March 23, a total of 3,693 Filipinos have arrived from Sabah, Ramon Santos, director of the Regional Disaster Risk Reduction and Management Council, said.

On Monday afternoon, 186 more persons arrived from Sabah and were given assistance by local agencies.
Posted by sabahkini.net at 08:00