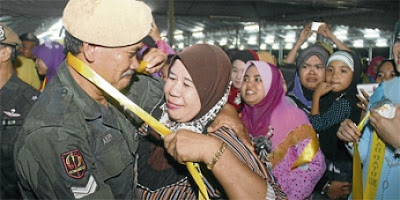 IPOH: Eighty-four VAT 69 police commandos, who served in the front line during operations against the Sulu armed intruders in Lahad Datu, were given a hero's welcome at the official residence of Perak Menteri Besar Datuk Seri Dr Zambry Abd Kadir recently.

They were the second batch of VAT 69 personnel who returned to their base in Hulu Kinta here. The first batch arrived last Friday.

Present were Corporal Azman Ampong, Corporal Mohd Tarmizi Hashim and Constable Mohamad Qaiyum Aiqal Zolkipli, the three Vat 69 members who were injured in a bloody clash with the armed Sulu militants in Lahad Datu on March 1.

Zambry announced the state's contribution of RM300,000 to the Tabung Perwira Ops Daulat.

"Another 60 police personnel from several departments in the state also participated in the operations."

Azizan, meanwhile, stressed that the VAT 69 personnel did not ask for sympathy or praise from the public and that they were doing their duty.

Qaiyum, who was recuperating from a single shot wound on his right shoulder, said his right hand was still numb due to the injury.