WHY 'SULTAN' IS DREAMING? 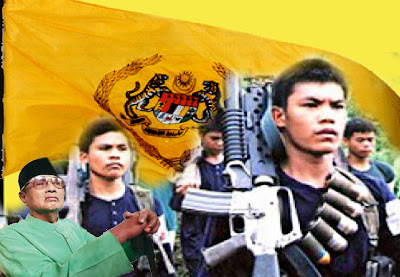 KOTA KINABALU: Sabah was free from any claim when it achieved independence through the formation of the Federation of Malaysia, according to former State Archives Director, Datuk Datu Tigabelas Datu Zainal Abidin.

He said independence was achieved through five charters which made Sabah free from any claim either from the Sultan of Sulu, Sultan of Brunei or the British which once called North Borneo their own, i.e. British North Borneo.

He said this during his talk titled "Sulu's Claim on Sabah: True Facts" in conjunction with the Ops Daulat Security Briefing organised by the Information Department at Wisma Dang Bandang, Tuesday.

"The third charter was when the British gave the North Borneo Chartered Company the power to administer Sabah on Nov 1, 1881, followed by the fourth charter on July 9, 1963, when we signed an agreement to join with Sarawak, Singapore and the Malay Federation to be free from colonisation.

"The fifth charter is when the United Nations announced that the majority of Sabah and Sarawak wanted to be part of the Federation of Malaysia," he said.

He said the agreement made between the Sultan of Sulu and Alfred Dent and Baron de Overbeck, if seen and studied today, has no credibility because there were two overlapping agreements.

The agreements, he said, were made by the same two individuals, Alfred Dent and Baron de Overbeck with the Sultan of Brunei in 1877, and the Sultan of Sulu in 1878 which was just a few weeks apart.

"The contents in the agreement refer to the same territory beginning at the Pandasan River to Paitan, Sugut, Bangaya, Labuk, Sandakan, Kinabatangan, Mumiang and all the other territories as far as Sibuco River.

"The only difference was the date the agreement was signed and the name of the sultan who signed it, namely Sultan Abdul Mumin from Brunei who conferred the Baron and Alfred as the Maharaja of Sabah, while the Sultan of Sulu only appointed them as the Sandakan Raja and Datuk Bendahara," he said.

"When two agreements referring to the same territory are made, it means the agreements are overlapping and thus there is an argument.

It has no credibility now and then.

"At that time of the agreement, Sulu was under the rule of the Spanish, but not the Sultan of Brunei who was recognised and protected by the British.

So where is it that the Sultan of Sulu can make an agreement when they at that time were colonised?

"Thus, he has no credibility, no stand, no sovereignty to make an agreement since he is colonised by the Spanish and the Spanish did not recognise him, in other words, the Brunei agreement is more valid than the Sulu if we were to look at it today.

"Because there was an agreement made on March 7, 1885, where the Spanish and British already decided their determined boundary which is Sabah and the Philippines, while the Dutch and the British in 1910 already finalised their boundary agreement that our boundary is in Pulau Sebatik and no longer in Sibuco.

"But we must realise, when World War Two happened, everything was changed. All the power was captured and dissolved by the Japanese.

They were in power and they did not recognise whether you are Sultan, Spanish, American, British, Dutch during the war, the Japanese completely became the supreme power.

"The Sulu of Sultanate never had an empire in Borneo unlike the Brunei Sultanate. The Sultan of Brunei back then was known as the Sultan of Borneo but after he lost his power in Kalimantan to the Dutch, Sabah and Sarawak to the British and the Philippines to the Spaniards, it became Brunei.

"The entity of the Brunei Sultanate was among the oldest empires and the biggest in terms of area and Brunei is among those sultanates which still exist until now, but why doesn't Brunei claim Sabah?

"This is because they respect the agreement since they too received protection from the British. This is different compared to the Sultan of Sulu, they were already colonised but in historical facts, a Sultan must be head of a state, a head of a region or a head of religion in their country. But the sultan who claims to be sultan now is not even recognised by the Philippine government.

"The last recognised Sultan of Sulu was Sultan Jamalul Kiram II and based on historical records in Malaysia, Philippines and Brunei, he died in 1936 and had seven daughters but no son.

"In Islamic law, a woman cannot be appointed as heir or successor and it is stated in the agreement signed that payment must only be made to the heir or successor but people wrongly translate the meaning of heir and descendants.

"A son is a successor or heir to the sultan but the thing is there was no son and so it is no longer applicable in this matter. There is no heir but there are a lot of descendants. Descendants or family is not mentioned in the agreement. So their claim is not relevant in terms of this agreement.

"In terms of Islam, those who carry the family surname are the son. And we must remember that the last recognised sultan does not have a son."

He said after World War Two, the British tried to recolonise India but failed because the people led by Mahatma Ghandi protested and in 1947 they gained independence and the same goes for Indonesia.

"Now in Sabah, Sarawak, Brunei including Malaya and Singapore, perhaps at that time we had no strength to fight against the British.

We felt it would be better for the British to rule us so that's why the British came back and ruled in 1946 to 1963.

"But on record, the British government never paid compensation of 5,000.

Why not? Because they say the Sultanate of Sulu has already been dissolved and the British Chartered Company no longer exists," he said, adding that nothing was paid until the day Malaysia was formed.

"In June 1963, Indonesia and Philippines protested against Sabah, Sarawak and Brunei joining Malaya and Singapore to form the federation of Malaysia.

"Indonesia viewed us as being trapped by the British to form Malaysia.

"Sukarno said he had no problem that Sabah and Sarawak form Malaysia on condition that there was a referendum from the United Nations and Tunku who was Prime Minister of Malaya at that time agreed to get the United Nations to make a referendum. The Philippines said they also had no objection but that the Sultan of Sulu wanted the payment of 5,000 to be continued. And Tunku said he would go back to Kuala Lumpur and get back to them on the claim.

"Then in 1978 during Berjaya time, the payment was stopped, but there was a claim again and then Berjaya paid but this time to the Philippine government through the foreign ministry, and in 1987, descendants came back to claim payment and what started with only seven people, ended with many making the claim.

"The Philippines did not pay them because they do not recognise the Sultan of Sulu."

Malaysians, he said, should not be worried, even if the so-called Sultan of Sulu brought the matter to the International Court of Justice because Malaysia's law can protect and defend the country in this matter.  (DE)
Posted by sabahkini.net at 12:03