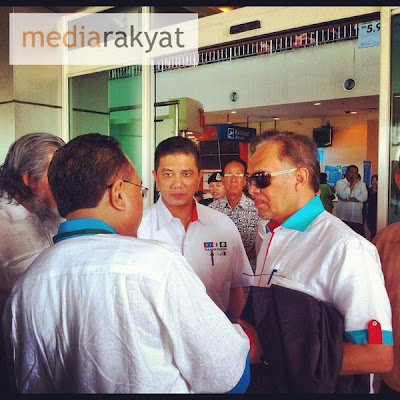 KOTA KINABALU: Pakatan Rakyat (PR) Sabah launched its 40-point People's Manifesto for the coming 13th General Election, here, Saturday. The manifesto has a similar theme and is consistent with the national PR manifesto, its Orange Book and alternative PR Budget 2013.

However, there are a few policies that are very focused and unique to Sabah and the people.

Each component has 10-points that spell out the programme and policies which will be implemented by the State Pakatan Rakyat should it win the forthcoming polls and rule the State.

Among the 10-points, he said, include reviving the spirit of the 1963 Malaysia Agreement, Borneonisation and emphasis on Sabah's sovereignty and autonomy in tandem with the Federal Constitution.

Thamrin said it also touches on a more comprehensive Royal Commission of Inquiry (RCI) on illegal immigrants in Sabah, balancing the distribution of Sabah's elected people representatives in Parliament, empowering the Native Court and defending the status of the natives, fighting corruption, and practising concrete ways of protecting the environment.

Sabah Reform Alliance (PPPS) Chairman Datuk Lajim Ukin who presented the second component said this includes the protection of Native Customary Right (NCR) and native rights, and improvement of infrastructure as Sabah is lagging behind compared to the peninsula.

He said the coalition will abolish Communal Land Titles as it is seen as not protecting the rights of the natives to the land because the government will develop the vast land for several decades.

He further said Sabah PR will formulate its own mechanism and methods that would prevent landowners selling the land like putting in a provision in the Sabah Land Ordinance only allows NT land owners to only sell to their next-of-kin and to obtain permission from the Land and Survey Department to do so.

"Other points mentioned in the second component are enhancing the social welfare of the underprivileged and needy people. We also aim to revive Amanah Rakyat Negeri Sabah (ARNS) by distributing RM200 a year to each Sabahan aged over 21, providing special assistance to former and retired security personnel by allocating bigger funds for their associations that represent them.

"In addition, I have prepared a design of hostels to be constructed in hospitals in main districts for the families of the patients especially those who come from rural areas at total cost of RM36 million and providing 50,000 affordable houses in the whole of Sabah," he said.

Sabah Reform Movement (APS) Chairman Datuk Wilfred Bumburing presented the third component which pledged to increase the oil royalty from five to 20 per cent by signing a new oil deal agreement with the Federal Government.

"We will also study all the oil and gas issues including bringing a motion to reclaim the Block L & M areas at the Sabah waters that were given to Brunei without getting the mandate from the State Legislative Assembly and the people of Sabah.

"The cabotage policy will be abolished being one of the main contributing causes for hikes in prices of goods in Sabah and abolish the monopoly concessions," he said.

One new point in the manifesto is to revive the Sabah Padi Board to take over the duties and responsibilities of the Malaysian Rice Board in Sabah as well as to further develop rice production in the State.

He said rice self-sufficiency is now less than 30 per cent in Sabah, which is crucial, because this is a food security that must be seriously looked into and there is a need to create more paddy land to have high rice production.

Other points include reviewing agreements with Felda and plantation companies operating in Sabah so that the State gets better revenue, eradicate poverty and generate ample jobs for the people and recognise Sabah as a valuable tourism hub in the country by increasing the funds to develop the industry.

As for the last component, PAS Sabah Chief Mohd Aminuddin Aling said the PR State Government would fortify a sustainable and genuine unity as well as solidarity among the people.

"The main highlight in this component is that we will set up a dedicated university called as 'Universiti Kinabalu' to be fully owned by the State Government based on bio-diversity of various fields including eco-tourism, conservation and indigenous people issues.

"Another aspect is to set up a TV Sabah that will promote diversity of local culture in line with the identity of Sabah and the nation.

Other points are looking at serving every strata of our society with fairness, to provide absolute freedom and respect in the aspect of religion and culture," he said.