MUSA REMINDS NOT TO BE COMPLACENT 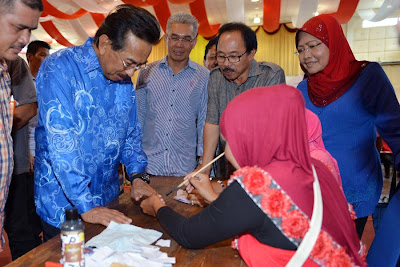 Met after overseeing the Libaran Election Dry Run held at Libaran’s Multi-Purpose Hall yesterday, the Chief Minister said it is critical for them to distinguish and understand their individual role during the coming 13th General Election.

He stressed that they must not be complacent even though BN is confident in maintaining the Libaran parliamentary seat as well as the Sungai Sibuga and Gum Gum state seats. Instead, caution must be exercised to ensure a full turnout of BN voters.

“Overall, I am satisfied with the preparation and strong cooperation shown by the Libaran Umno Women, Youth and Puteri movements in the dry run.” 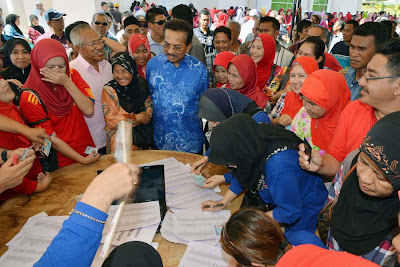 “It shows that we are fully prepared to face the general election at any time because all of them including the respective polling district chiefs know their roles,” said Musa who is also Libaran Umno Chief and Sungai Sibuga Assemblyman.

The dry run was vital in identifying weaknesses that can be rectified before the actual general election. In addition, the event also provided essential guidance to first time voters.

“This is where the role of the Wanita, Pemuda and Puteri UMNO is most crucial in ensuring that everything will run smoothly during the actual polling day. We want to avoid chaos and being seen as incompetent,” said Musa. He also urged theem to ensure that BN supporters would come out in full force to vote for the BN candidates.