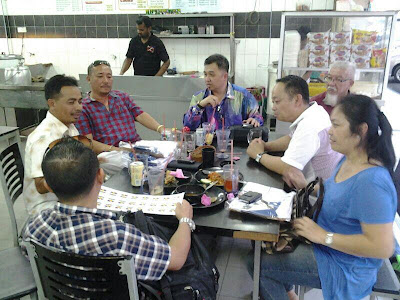 KOTA KINABALU: Pertubuhan Pribumi Rakyat Sabah (Pribumi's) proposed that the State Government set up a tribunal to look into native customary land rights in the State.

Its President Datuk Dr Mohammad Jeffry Rosman on Saturday said a tribunal panelled by qualified people is essential as it could assist natives who face such issues.

He said this after presenting appointment letters to 26 members appointed as Pribumi's committee members at the Sabah Oriental Hotel here.

On that note, he said Pribumi's will make a courtesy call on Chief Minister Datuk Seri Musa Aman to invite him as the guest of honour for their official launching which is set for next month. The date has yet to be determined.

Pribumi's, Jeffry said, with its tag line 'Ini Baru Lah Ngam' is a NGO which fights for the truth for native Sabahans, adding that they aim to register 120,000 members by end of this year.

"We are in the midst of spreading our wings at Parliament level before going to State level, beginning with Tawau by end of this month, followed by Sook, Sepanggar, Lahad Datu and Kudat," he said.

He also said Pribumi's will continue to fight for the Federal Government's approval of the Saham Amanah Rakyat Sabah as it could benefit the natives.

"If what we propose to the Government gets approval, then we in Pribumi's comprising 15,000 members pledge to support the Government and make sure they continue to govern the country," he said.

On another note, he said Pribumi's will not allow an inch of Sabah to be taken by terrorists and they pledged to stand together with the Government and the security forces to protect the country's peace and sovereignty. (ST)