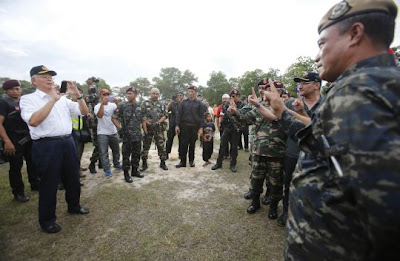 PICTURE ......Najib takes a picture of ministers and the chief of defence forces after his visit to Felda Sahabat March 7, 2013.

KOTA KINABALU : Datuk Seri Najib Razak will visit Sabah soon to express his deep appreciation for the sacrifices made by the security forces in defending the country’s sovereignty by thwarting the intrusion of Sulu terrorists.

“The Prime Minister was touched by the contributions and sacrifices made by all quarters, particularly the security forces as well as stakeholders in resolving the Lahad Datu intrusion,” Hishammuddin told reporters at the Kota Kinabalu International Airport, here today.

Hishammuddin said the setting up of ESSZONE covering 10 districts as a legal basis for ESSCOM must be clarified to avoid confusion on the areas covered.

Welcoming the appointment of Mohammad Mentek as ESSCOM director, Hishammuddin said this was in line with the government’s plan to make ESSCOM’s implementation a success.

On Sabah’s security, he said the situation was returning to normal with the exception of several villages where mopping up operations were continuing and expected to end soon.

In this regard, he said the establishment of ESSCOM showed the government’s commitment in ensuring the safety of the people of Sabah.

Hishammuddin said there was no declaration of emergency and curtailment of the 13th general election with the setting up of ESSZONE.

Meanwhile, Musa, who also welcomed the appointment of Mohammad Mentek as ESSCOM director, described it as timely and urged all quarters to give the latter the support needed. (Bernama)