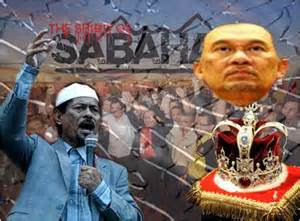 INSISTING .....Why is Anwar Ibrahim insisting that Pakatan Rakyat contest in both state and parliament seats when the coalition had made known that it cannot win Sabah?

KOTA KINABALU : Pakatan Rakyat leader Anwar Ibrahim’s abrupt dismissal of local parties in the coalition’s bid to “push BN out of power” in Sabah in the coming general election has left many unanswered questions.

Local opposition Sabah Progressive Peoples Party (SAPP) for one is puzzled since DAP national advisor Lim Kit Siang had not too long ago said that the coalition did not expect to win in Sabah.

“(So) if Pakatan do not expect to win in Sabah as mentioned by Lim Kit Siang then why are they obstructing Sabah parties such as SAPP from fighting for state rights?

“Are they having some hidden agenda which is more important than toppling BN in Sabah?” asked SAPP secretary-general Richard Yong.

Yong also recalled that Pakatan had already made known that they had a good chance of retaining Penang, Selangor, Kelantan, Kedah and winning Perak, Negeri Sembilan and Perlis.

With so much going for Pakatan in Peninsula, Yong thinks its “over-confidence” that is driving Pakatan’s decision to single-handedly take on the mighty Barisan Nasional.

“They hold themselves so high that therefore there is no need for cooperation from Sabah parties to campaign against the Barisan Nasional.

“They have ignored the people’s aspiration for the opposition to go one-to-one against the BN at the coming elections,” he said.

Both PPPS and APS are not registered parties and their candidates will be fielded under PKR, PAS or DAP. PPPS is led by BN defectors Laim Ukin (Beaufort MP ) and Wilfred Bumburing (Tuaran MP).

Both were tasked by Anwar to ‘draw-in’ the Muslim and Kadazandusun voters respectively. He obviously now believes that this is a done deal.

The decision had sidelined SAPP and the Sabah chapter of the State Reform Party (STAR). Both parties, like everyone else, had hoped to see a straight fights in majority of the seats in the coming election.

But the ‘dismissal’ had put paid to any possibilities of this.

SAPP, according to Yong, has been in talks with Pakatan since 2012, and was disheartened that Anwar had “changed their original initiative”.

“It is regrettable that Anwar has decided otherwise now. This about-turn had marginalised local parties, probably with the intention to demolish the political influence of Sabah parties.

“Pakatan has changed their original initiative and going for all state seats.

“Changes made by Anwar is directed at wanting all parliament seats and state seats. (His bid) to monopolise the state political power is a conflict with SAPP’s political agenda for state autonomy and Sabah’s right.

“We have seen enough of damage and unfavourable consequences caused by BN’s monopolising state power.

“Sabah must not repeat the same mistake!” Yong said.

He said now that Pakatan had permanently shut its doors on a ‘collaboration’ with local parties, SAPP will rely on its own strength and “do its best” to defeat BN.

“Even though SAPP is being marginalised by Peninsular-based parties, we will do our best to defeat BN.

“We are facing two giants which are resourceful. But we will continue to struggle for Sabah.

“Anwar had on April 14, 2012 openly mentioned about the cooperation among the opposition parties and his willingness to go for more parliament seats while letting SAPP capture more state seats with the intention to replace BN with a new government together.

“But he has gone back on his words now.

Sabah has 25 parliament and 60 state seats which are up for grabs.
Posted by sabahkini.net at 11:39