BN TO KEEP PAK LAH, SOME VETERANS FOR GE13 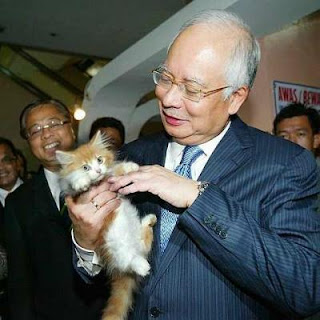 DEFEND....Abdullah (right) is set to defend his parliamentary seat in the coming general election.

The Malaysian Insider understands that the former prime minister has been approached to stand in the parliamentary constituency he first won in 1978 as the amiable leader is one of the 'winnable candidates' sought by Umno President, Datuk Seri Najib Razak.

“Tun Abdullah has been asked to defend his seat as Umno and BN wants to go for a maximum win,” a coalition source told The Malaysian Insider.

“Umno and BN are going through the lists to ensure they keep candidates who can win either at state or federal levels. Every seat counts,” added a BN source, saying veterans such as Sri Gading MP Datuk Mohamad Aziz and Tasek Gelugor MP Tan Sri Nor Mohamed Yakcop could also remain on the candidates list.

Analysts and critics say Najib wants to ensure an all-out victory although it is difficult for the country’s sixth prime minister to match his predecessor’s performance in the 2004 and 2008 elections.

Abdullah won 91 per cent of the 222-seat Dewan Rakyat in parliament in 2004 but lost the two-thirds majority when his coalition only took 140 federal seats and eight of the country’s 11 state assemblies in 2008.

“Datuk Seri Najib Tun Razak is slated to win the next GE. However, victory is only the first of his KPIs. The second is that he must surpass his predecessor Abdullah Ahmad Badawi’s 2008 showing (140 seats).

“Indeed, the rationale behind Najib’s rise to the premiership was his unspoken promise of returning Umno (and BN) to its earlier glory. Failure to achieve this will lead to a re-assessment of his leadership,” regional political analyst Karim Raslan wrote in his column in The Star newspaper yesterday.

Najib and his deputy Tan Sri Muhyiddin Yassin have spent the past few months criss-crossing the country to gauge BN’s readiness for the general election, which must be called by middle of 2013. PR parties have said they will not call for snap polls in the four states they control until after this June.

Analysts have predicted that BN will call for the election next month but the still unresolved issue of a civil service pay revamp could erode the ruling coalition’s support among the 1.4 million government servants. Najib had allocated more than RM2 billion for the revamp, including a two per cent hike in pension for 600,000 retirees in the 2012 Budget but most of the pay rise is going to senior officials.

The prime minister has ordered a review, with a report due on April 16.

BN is also seen to delay elections as it tries to overcome a scandal involving cattle-farming project National Feedlot Centre (NFC) where the family of Wanita Umno chief Datuk Seri Shahrizat Abdul Jalil have been accused of abusing a RM250 million soft loan for their own ventures.

The Umno president and his coalition are also fighting off PR, which is championing a movement to stop an Australian rare earths refinery from operating in Kuantan, the state capital of Pahang, Najib’s home state and also the site of his Pekan federal seat. The authorities and miner Lynas Corp maintain the plant is safe but residents are concerned about the wastes disposal as Australia has refused to take back remnants of the ore mined from that country.

The Business Times reported yesterday that Putrajaya is to name Khairy Jamaluddin as Perbadanan Usahawan Nasional Bhd (PUNB) chairman, which sources told The Malaysian Insider was a move to ensure the Umno Youth chief has a better standing ahead of the general election

“The decision was made as Khairy is good with the youths but has no official post except as Umno Youth chief. He needs a government post to reinforce his position ahead of the polls,” a government source told The Malaysian Insider, indicating the first-term Rembau MP is expected to defend his federal seat.

“Khairy deserves a higher post but it is not possible yet. So, this is the best that can be done for him to be on a stronger footing,” said another source, confirming the Umno leader’s appointment to PUNB.

Putrajaya routinely appoints MPs to lead government agencies, which are seen as a training ground for their eventual appointment to the Cabinet.