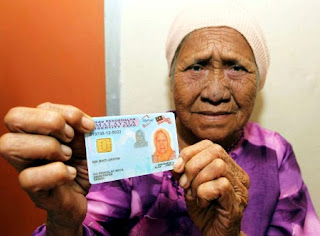 OCTOGENARIAN Nik Ariffin has 'come back to life' after the National Registration Department (NRD) corrected its earlier mistake of declaring her dead four years ago.

"I feel like I have come back to life," said the 81-year-old from Papar, about 50km from Kota Kinabalu Sabah.

A local ethnic Bajau living alone, Nik said she lost her citizenship rights when someone made a false report to the authorities that she had died.

Since then she has had problems getting assistance from the Government. She could not even register for the Bantuan Rakyat 1Malaysia (BR1M) or vote in 2008.

Papar Umno Youth's Armizan Mohd Ali said they would appeal to the relevant agencies to allow Nik to receive the BR1M and register her as a voter.

"We hope the Government will take steps to ensure similar incidences like Nik's will not recur."