THE 'GREAT WALL' IN SABAH 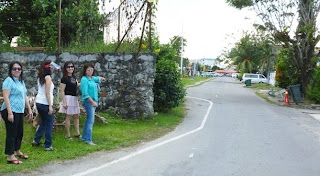 The resident in the area made the complaint and requested the women wing to bring the matter to the attention of the authorities which include the JKR, Land and survey, DBKK, the Chief Ministers, and the local assemblymen.

They said the 'Great Wall' is not only dangerous to the motorist, pedestrians and it is also ugly. This 'Great Wall' has totally reflected the inability on the part of the BN government to get the matter resolved. The BN is helpless and couldn’t border to help the people here. A simple matter like this the BN also can not get it straighten out.

They DAP ladies said that they don’t believe that the owner of the land is that unreasonable and cannot discuss over the issue to make way for the road and walkway. They said if there is some sincerity and willingness to discuss over the matter, there is nothing cannot solve. They believe that the problems came from the previous developer of the housing and from the DBKK (MPKK) that caused the land owner not happy about it.

It is the hope of the public that the land owner can be so kind to allow the corner of his land to be used to straighten the access road and to put in the walkway. The DBKK and the Land and Survey department will be happy to compensate and reimburse what ever money and expenses incurred. The DAP lady members don’t mind to come to see the land owner to seek his consent if he permits so.