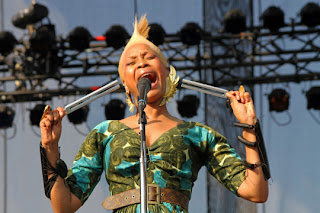 The queen of neo-soul stirred unexpected controversy when a photo of her body art - with a tattoo of the word 'Allah' inscripted in Arabic on her shoulders, was published in The Star.

(Erykah Badu's concert is cancelled because it violates PUSPAL's guidelines, whereby it touches the religious sensitivity and culture values in Malaysia).

An insider tells The Daily Chilli that his ministry has been bombarded with memorandum and protest letters, demanding that the Grammy winner's concert in KL be called off.

When contacted, Pineapple Concerts Sdn Bhd, the organiser of Erykah's concert in Malaysia, say they are trying to rectify the situation.