RETURN OF THE SERIAL SPLASHER? 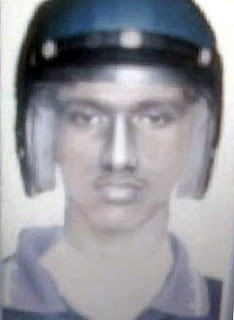 BEWARE....Police is looking for this person, who believed to be the serial acid splasher.

A WOMAN suffered severe burns on her face and body after she was splashed with corrosive liquid in what could be the possible return of the serial splasher.

Police are looking at the possibility that the splasher could be back in Kajang, Selangor after an almost 10-month hiatus.

In the attack which occurred at about 11am on Saturday, the woman in her 20s was splashed while standing outside a beauty parlour near a department store in Balakong.

A man came from behind and splashed the liquid on her back and face before fleeing.

It is unclear if the man was riding a motorcycle as police have yet to get a full statement from the victim who is receiving treatment at a private hospital.

Police are also not ruling out that the case is personal in nature as this is the first time a splashing incident has taken place here.

The serial splasher struck fear in Klang Valley residents during a three-month period between March and May last year with more than 20 people suffering burns.

The attacks began on March 2, when eight students and a teacher from SK Bukit Bandaraya in Jalan Bangkung, Bangsar, were splashed with a corrosive liquid by a motorcyclist.

The attacks, however, stopped shortly after police, who claimed they were close to catching the splasher, released a photofit of the culprit in May.