INSULTING THE PEOPLE BY DENYING POVERTY 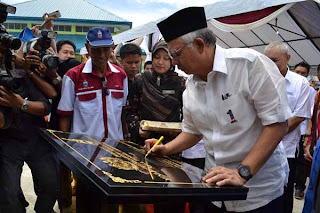 OF ALL the many current issues being debated in the media, Najib’s ‘assurance’ during his recent visit to Sabah that the state is no longer the poorest in Malaysia is the one that currently hitting the most sensitive nerves among Sabahans.

While the statement was supported by local BN leaders, the opposition leaders have expressed shock at the Najib’s statement. People on the ground are scornful and believe it is all a desperate political spin to give a positive impact for Najib’s visit to Sabah prior to the general election.

According to Najib, “per capita income in the East Malaysian state has crept past Kelantan and was almost on par with the national average” with the number of households categorised as hardcore poor has been reduced to 7,000 now, down from 30,000 previously, without any mention of exact time period. "Sabah is now a state with so much potential," he observed.

The main problem with Najib’s statement is that it lacked any evidence. And it’s an insult to say that “Sabah has crept past Kelantan” as if Sabah deserves only to be compared with the second poorest state in Malaysia.

Why not compare us with Selangor and Penang? If we had crept past the second poorest state, the progress wasn’t much and it meant we had to struggled on our knees just to do that. This therefore means we are no much better off.

And this statistics about reduction of hardcore poor households coming down to 7,000 from a previous 30,000 is very doubtful because it cannot be corroborated from any source. Najib didn’t even say from what year to what year the reduction took place.

And if this was true a personnel from the Statistics Department should have came up with a supporting statement to provide reliable and verifiable data. I would believe Najib only if there is an independent confirmation from the World Bank.

I would like to remind BN leaders that when World Bank submitted its report to the State Government in November 2010, it’s representative Emmanuel Jimenez said that “Sabah was not only the poorest state in Malaysia but it’s likely to stay that way for a considerable length of time given current efforts in poverty eradication.”

The report specifically said that “the bottomline was that Malaysia’s economic planning in Sabah so far HAS NOT BEEN FOR INCLUSIVE GROWTH. Although efforts by the Government have somewhat brought down the poverty rate, it’s still not enough. Sabahans continue to struggle to make ends meet. This is more evident in the outskirts of the towns.”

The phrase “has not been for inclusive growth” means any growth tyried by the government didn’t include most of the state’s economic sectors, and excluded most of the people. So, there! My question is how did those poor people suddenly disappear?

Certainly it was not because of any fantastic government efforts! All those poverty eradication programs didn’t and aren’t working the 1Azam Wanita 1Malaysia (a rural economic financing program for women) has not made any impact in Sabah, the e-Kasih has been widely accused of being implemented with pilih kasih (favouristism) and the PPRT is being abused to reward Umno supporters who are already doing well financially.

They are all not achieving their targets as planned although the government had bragged they would be bringing poverty down. The government actually had not even taken into account the force of high inflation which is killing off whatever small effects are coming from these mismanaged programs. So what the people is really getting is the receding value of their income in the face of skyrocketing cost of living which is causing dramatic increase in urban poverty.

Because of this inflation, even government servants have to depend on Ah Longs to make ends meet, and as a consequence they suffer even more from having to make the exorbitant repayments. Employment and business opportunities are scarce. What you see in the local newspaper are court summonses and bankruptcy notices. As of June 2010, 218,561 Malaysians have gone bankrupt, and worse, Malaysia itself is feared to be going bankrupt by 2019!

As for Sabah, we have to understand that poverty is not happening mainly because of international economic forces, but by design as a way for Umno/BN to ensure we Sabahans continue to be beholden to them.

Najib’s statement that Sabah has such great potential is another insult because by saying so he is being hypocritical because he knows very well how the Federal Government is denying Sabah a lot of potential growth by taking away 95 percent of our oil, taking a massive collection of taxes from Sabah, giving us small development allocations, perpetuating the cabotage policy which is accelerating inflation in Sabah and Sarawak, and taking lands in Sabah for Felcra and Felda which do not contribute much to the state economy.

All these policies are strangling Sabah’s economy, had contributed to us becoming the poorest state, so where are we going with this great potential that we are supposed to have now? All I can see is that Sabah is a great potential for the Federal Government to exploit further, and to be treated as a fixed deposit.

And isn’t it ironic and laughable that while all this talk us about not being the poorest anymore, there is that report about illiteracy still pervading Ulu Paitan? The report talks about people being unable to attend school due to impossible distances. If that is not abject poverty, I don’t know what is.

And on then same page that Datuk Azizah Mohd. Dun was agreeing with Najib about Sabah no longer the poorest state, there is the embarrassing report about people in Keningau and Tambunan (Tan Sri Pairin’s area) asking for allocations to improve their lives (to build roads, huts, gravity pipes, clinics, etc.) because “the lives of many people are no different from that of the 1960s”! This clearly means the people there have never enjoyed the fruits of independence! What a shame!

We can continue to cite thousands of examples of poverty still pervading the people just to prove that the Federal Government has failed miserably to help Sabahans. We can even provide graphic pictures of people living in abject poverty in the interiors. We have known and had spoken about this since a long time, so when the Chief Executive of the land comes here and declare most of our poverty has disappeared, it is just unacceptable and insulting.