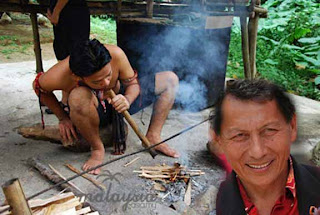 THE ANNOUNCEMENT by the Prime Minister that Sabah is no longer the poorest state gives us no comfort at all. It doesn’t make sense that all of a sudden poverty has been reduced after the situation has been around for decades.

In a single visit by the PM, which was supposed to be “the last visit to Sabah before the general election,” poor households have gone down from 30,000 to 7,000. And we are not told when this reduction happened, and what has caused it to happen. If there was a sudden economic miracle to make poverty disappear in 23,000 households, how come we never heard about it?

I guess we can’t really blame the PM for having to come up with this kind of stunt. If the state Umno/BN couldn’t solve the poverty problem then the only way to go about is to deny the poverty and at least give some comfort to the people.

At least the BN leaders will now have some capital to use to deny the opposition’s propaganda that Sabah, according to the World Bank, is the poorest state, and that 40 percent of all poor people in Malaysia are in Sabah!

I don’t have all the statistics, but as a Sabahan I know it in my blood that, here, poverty is everywhere, in the cities, towns and worst of all in the villages. I can speak for my own area, Kiulu, which is still very much undeveloped after half a century of independence.

Around 60 villages still don’t have roads, so people living in these kampungs have to walk or take bamboo rafts to get to the nearest roads. In many places they can’t even do that because when the water of river is high they can’t cross by wading through because there are no hanging bridges.

If any BN leaders can really spend his or her time by going to the remote villages in many parts of Sabah, they will see that the people are malnourished. They may be happy, working and going about actively, but if you look at them, you would notice they have aged beyond their years.

Many of them who look like they are in their 60s are actually only in their 40s. They have grown up and brought up their families working the hills with their bones and muscles without much complaint.

Too many of them live in dilapidated wooden and bamboo houses, and often there is not even ten ringgits in the whole house. The have food all the time because they live off the land where they have planted some cash crops and orchards but they donp;t get the right nutrition.

What they get is also far from being sufficient for them to rise above the poverty line, which is RM866 for an urban household. I would put the average income of households in the remote villages to be about RM100.

In 2010 Datuk Seri Sharizat Abdul Jalil had said in Sabah that besides 44,643 hardcore poor families in the state, and that there were another 55,957 families categorized as 'poor' and a further 86,399 families categorised as 'mudah miskin' (borderline poor).

And she pledged that poverty in Sabah would be eradicated by the end of that year. So when the PM came here a few days ago he indirectly admitted the BN failed to eradicate poverty in the state because there were will 7,000 poor households.

Whatever figures the BN give to us about poverty is no longer believable because the statements of various leaders are different from each other, so we know what they are saying are only for political propaganda and have no bearing on the truth. They have this habit of trying to make poverty go away like magic by saying it is not there.