CONSIDERED PLIGHT OF NATIVES IN FMUS 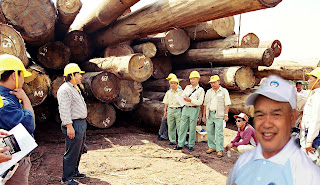 THERE is no doubt that the Forest Management Unit (FMU) programme is beneficial to Sabah but its planning and implementation during Datuk Yong Teck Lee's tenure as Chief Minister were poorly executed.

Parti Bersatu Sabah (PBS) Vice-President, Datuk Herbert Timbon Lagadan said the villages and Native Customary Rights (NCR) land should have first and foremost been excised out of the FMU concessionaires.

"I totally agree with Sabah Progressive Party (SAPP) Youth chief Edward Dagul that FMU benefits the people of Sabah but only that its planning and implementation were poorly carried out until the negative impact now is on the villagers living on the NCR land.

"As a result, all the (NCR land) problems faced by the people of Sabah nowadays are due to inefficient planning and implementation of the FMU programme. Prior to the FMU implementation, Yong should have first brought out the villages and NCR land from the FMU concessionaires so that the villagers would not feel that their rights are overlooked," he said, Saturday.

Herbert, who is also Community Development and Consumer Affairs Assistant Minister, was commenting on Dagul's statement that called on Herbert to directly ask Chief Minister Datuk Musa Aman to repeal the FMU programme instead of beating about the bush.

"Such inefficiency in planning and implementation on the FMU reflect Yong's incapability to provide good governance.

"The many good things implemented by him (Yong) during his tenure as Sabah CM was due to the Barisan Nasional (BN) Government's capabilities and not him.

"So, if he (Yong) alone wanted to claim credit for the good things that happened during his tenure, then he alone must accept responsibilities for the bad policy he made during his chiefministership," Herbert said.

Dagul was also reported as saying that Herbert is trying to distract people's minds from the fact that no one from PBS had commented on the statement by the State Attorney-General (A-G) on the status of Native Customary Rights (NCR). Dagul asked Herbert whether he is in agreement with the State A-G's statement on the validity of the NCR status.

In this respect, Herbert questioned whether Dagul is the only one in Sabah who never read PBS' strong statement against the State A-G's statement on the NCR issue.

"Is Yong also as blind as Dagul? Why can't Yong give a decent advice and reminder to Dagul on PBS' excellent and prompt response to the State A-G's statement?

Herbert said PBS deputy president Datuk Seri Dr.Maximus Ongkili issued a prompt response on Feb 11 by stating his disagreement with the State A-G Datuk Roderic Fernandez's interpretation of the NCR provision in the Sabah Land Ordinance (SLO) that there is 'no NCR land after 1930'.

Describing Roderic's statement as a wrong interpretation, Ongkili said that unlike in Sarawak, there is no cut-off point with regard to NCR land in the context of Sabah.

Meanwhile, SAPP Supreme Council member Peter Marajin said Herbert is either ignorant or was asked to bark at the moon.

He said the hundreds of land grabs over NCR lands, which Suhakam had recorded at more than 834 cases, happened outside the FMU areas and nothing to do with forest reserves.

There were many other cases, yet to surface like Kg Mapat in Banggi, Lorol Kecil in Kudat among others, he said.

Marajin said that in fact Section 23, 24, 25 and 26 of the Sustainable Forest Management Agreement (SFMLA) recognises and protects NCR.

He said it seemed that the present State BN government had introduced a new 'ruling' based on the recent statement by State Attorney General Datuk Roderic Fernandez when he stated that there is a cut-off date for NCR land claims that is by 1930.

Marajin reiterated that the FMU policy under Yong's Cabinet then had taken into consideration all aspects of development in the FMU areas including the interest of NCR, the community development, employment and training for local people and basic infrastructure and social development are incorporated in the SFMLA.

The relevant Clauses provided under the SFMLA which clearly state that the native rights are well protected under the policy are:

Section 23: The rights and privileges of the natives under the existing laws and regulations, including Customary Law, are not affected or limited in any respect under this Agreement.

The Licensee shall recognise such rights and privileges including, without limitation to those relating to entry into the Licensed Area to collect certain wood species and exploit Minor Forest Produce (as allowed and defined in the Forest Enactment 1968 and Forest Rules 1969) for its own personal use and not for business purposes.

Section 24: The Licensee shall assist the Government in the implementation of community/labour welfare schemes within or adjacent to the Licensed Area. The welfare scheme would, interalia, include ;-

a) establishment of work place for the community;

b) development of education and medical facilities;

c) provision of communication facilities; and

Section 25: The Licensee will take appropriate steps to employ bumiputras in accordance with the National Development Policy.

Notwithstanding the foregoing, the employment of non-Malaysians is subject to the approval of all State/Federal Government Departments/Agencies having jurisdiction with respect thereto.

As a condition precedent to the Licensee's right to demonstrate that Malaysians are not available, the Licensee shall prove that it has conducted and is continuing to conduct a broad and vigorous recruiting and training programme for Malaysian personnel.
Posted by sabahkini.net at 02:14