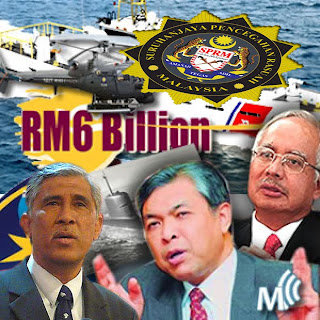 AMENDMENT...... Najib said the formation of a MACC service commission requires an amendment to the Federal Constitution.

DATUK Seri Najib Razak today pledged to give more freedom to the Malaysian Anti-Corruption Commission (MACC) in the appointment of its officers if Barisan Nasional (BN) wins two-thirds control of Parliament in the next general election.

“I agree with the view of the MACC advisory panel, that an anti-corruption service commission be formed. This commission will be given the power to appoint and terminate MACC officers,” the prime minister said at the opening of an MACC event here.

Currently, all appointments and termination of MACC officers are done through the Public Service Commission (SPA).

“But this needs amendments to the Federal Constitution; insyaAllah (God willing), if Barisan Nasional is given a two-thirds mandate in the 13th general election, constitutional amendments will be made and this commission will be formed.

“The MACC needs a special body in the selection based on quality and credibility of candidates to carry out specific duties,” he said.

Najib said were the service commission to be formed using the same model as the Police Commission, the MACC would have to power to “filter, choose, interview, appoint and terminate” its own members.

He said there was also a proposal to elevate the status of the MACC chief commissioner to a standing equal to the Attorney-General or Auditor-General.

The prime minister later announced that 150 positions would be created within the MACC every year to increase its manpower to 5,000 people