WHERE DOES PAKATAN STAND? 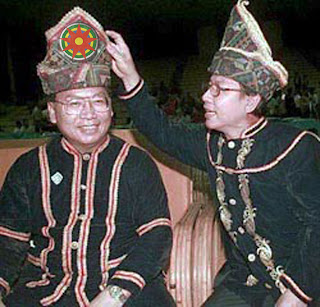 IF IT is true that Dr. Jeffrey will contest against his elder brother Datuk Pairin, logically this proves that the former is really serious in his political struggles. This scenario will send a strong message to the people that STAR is serious in wanting to bring changes to the fate of Sabahans.

The time has come for Sabahans to demand back the rights promised by our founding fathers of the Malaysia Federation. We must do this come the next GE, it is now or never. I urge STAR to continue their campaigns in explaining to the people what the party is all about. Too long have we been short change of our rights.

Many may argue that Dr. Jeffrey is a frog and is not consistent in his political struggles. I would say that it is because of his (Jeffrey) consistency in what he believes forces him to leave political parties. For so long he has been yelling and screaming about the 20 points agreement and is consistent in doing so. Parties and their presidents have their own principles and goals, for that I am happy that Dr. Jeffrey has finally settled in STAR.

PBS says that STAR is hiding behind the NGO UBF. They (PBS) claim that UBF will book community halls here and there but come ceramah day, STAR flags are seen all over the community hall. I would like to ask PBS members, what do they mean by this? So what if the STAR flags are hoisted during UBF functions? Indeed UBF is an NGO, but is it not obvious that STAR’s struggles are in line with what the UBF is representing?

To achieve autonomy, a solid alliance of SAPP and STAR under the UBF cause will be the best bet for the local opposition. If SAPP is honest in wanting to fight for Sabahans, they must forge the alliance with STAR.

On the ground and coffee shop talk has indicated that STAR’s strength lies in the rural areas. SAPP’s strength however lies in the urban areas. So it indeed makes a good combination. The next question is, where does Pakatan stand?

Having been a PKR hardcore for all these years (since the days of Parti KeADILan Nasional), I think that it is time to focus on Sabah, with the UBF as our vehicle for change. I am a political nobody, but it is the effort in doing your best that counts.

It will be a serious challenge to go back to the people whom I have tried so hard to convince them that PKR is the choice, and suddenly turn around and get them to focus their direction to STAR. Nevertheless, it will be worth it should Sabah have a local government, headed by local leaders that need not report to Putrajaya.

Don’t get me wrong, I have no problem (personal whatsoever) with west Malaysians, but hey, we have our rights too. Not to mention the future of our children and grandchildren.

The federal government has announced that only in Sabah and Sarawak can the word Allah be used in Christian bibles, whereas it is not applicable to do so in west Malaysia. Is this rational? What happens if BN is still the federal government and Sabah is headed by an opposition government?

High possibility they (federal BN) will reverse this ruling. It is not that I am ungrateful that the federal government has decided on this ruling, but please have a standard. To say that Sabah and Sarawak only are given the privilege, I don’t think so, because if so, then prove it by giving us what we were promised in the agreement of the formation of Malaysia, the 18 and 20 point agreement.

As Daniel John Jambun said, we need not beg for oil royalty, oil royalty which is rightfully ours 100%. This cry was echoed by Raja Petra as well. It will be a mammoth of a task to even get 20% should Sabah fall to the opposition, what more 50% or 100%! We should strive and fight for our rights. It is now or never.

Going back to Pakatan, I do not see PR as the enemy. The target is BN. Like I mentioned earlier, if STAR and SAPP forges a solid alliance to contest Sabah, where does PR stand. It hurts to say this, but we might have to take the BN head on and flank the PR offensive at the same time. As much as possible we want to avoid multiple cornered contests, but if it is the only way forward, then we have a lot of work to do.